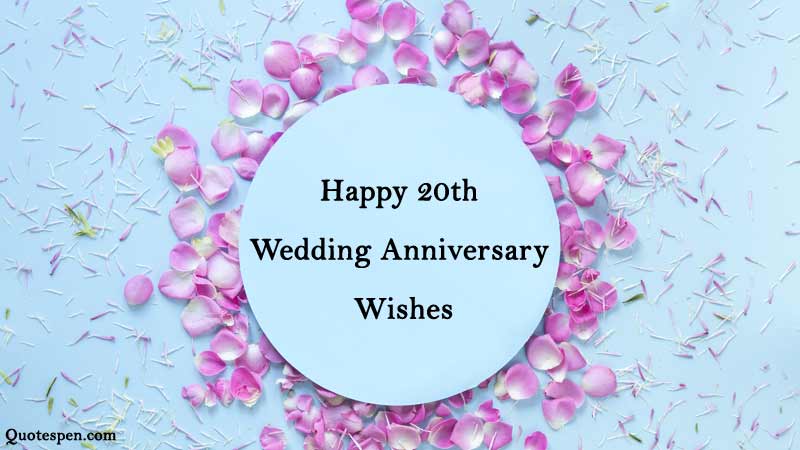 If there is any problem in any person’s life then he needs someone so that he can share his sorrow with them. But husband-wife don’t need anyone than each other. Both are life partners and stay together in every problem and sorrow throughout life. That’s why couples can never forget their wedding anniversary, nor can they let go of their 20th wedding anniversary. They will plan something to make it memorable.

2 decades ago two souls became one. May God bless you with years of togetherness. Wishing you a very happy anniversary.

I want you to know it was my best year ever and I love you so much. Happy 20th wedding anniversary wishes day to both of us! 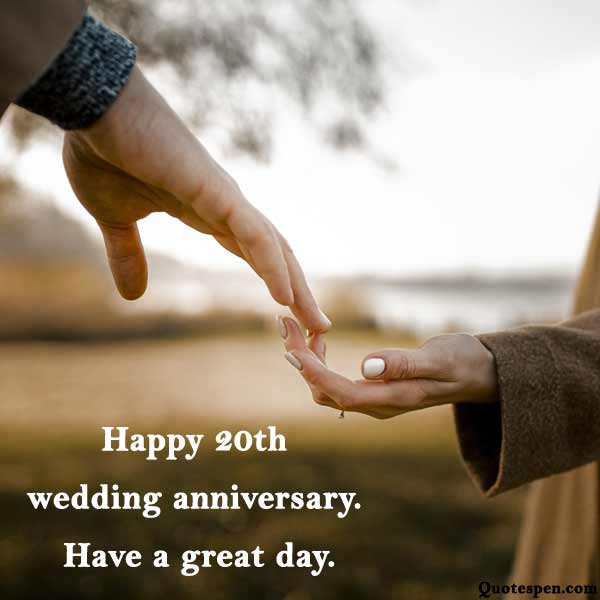 Wish you a very happy 20th Anniversary my favorite couple, Hope you find time to look back on all your sweet memories together.

Many dreams, so far, you have accomplished, In marriage, which 20 years ago was established!! Happy wedding anniversary. 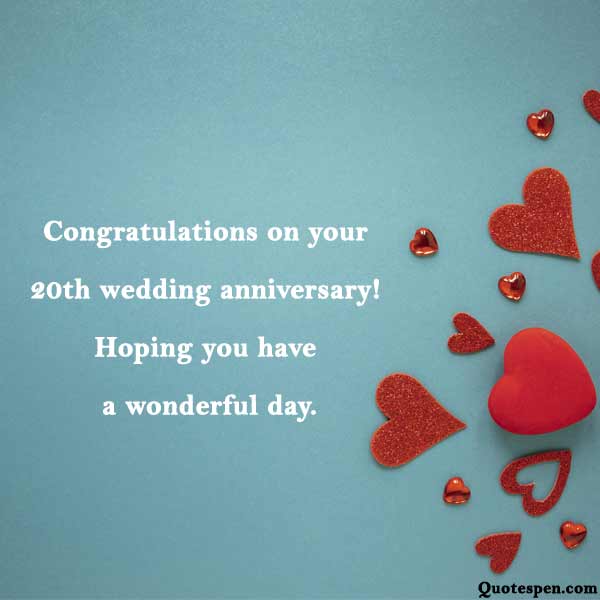 Congratulations on your 20th wedding anniversary! Hoping you have a wonderful day.

20 years ago you tied a bond that was strong, Wherein every day you sang a lovely song!!! Happy wedding anniversary.

Loads of love and joy, you have bought between you, In twenty years of relation, which is pure and true!!! Happy wedding anniversary.

I wish you both long life in consent, whatever happens, try not to break. No matter sometimes how hard it seems, You don’t give up and follow your dreams. Happy 20th anniversary!

Happy 20th anniversary! Reaching 20 years together is a huge accomplishment and I couldn’t be happier for you both. Congratulations.

Even after so many years of living together, you both haven’t got tired of each other. Love and much happiness to one of our all-time favorite couples.

Wishing you all the happiness and love in the world and congratulations on your anniversary.

20 years of truth and purity, Your marriage means more than sanctity, Warmest wishes to the wonderful two of you on your 20th anniversary.

Wishing you a wonderful 20th anniversary filled with laughter, love, and joy.

May your love continue to bloom in all its glory for many more years to come. Best wishes to you both on this momentous occasion. Congratulations!

May your door be knocked by Lady Luck, And for both of you, good wishes you can pluck!!! Happy wedding anniversary.

Today, our 20-year anniversary. In a few months, our 15 year wedding anniversary. I have loved you for the past 20 years, and I’ll love you for many more.

Happy anniversary to you both; Have a bright and happy day. Your marriage sets an example; It shines in every way. 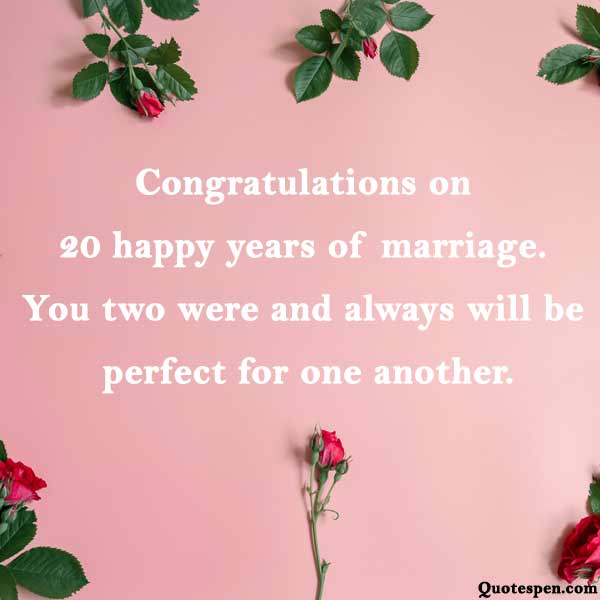 Congratulations on 20 happy years of marriage. You two were and always will be perfect for one another.

Wishing you all the best for another 20 more years of happiness together! Congrats.

Looking at you two my heart believes, That marriage is where love is conceived!! Happy wedding anniversary.

Congratulations on your anniversary. Twenty years of happiness and love and you’ve still got a bond as strong as any other couple.

Nothing in this world could be more pure, Than twenty years of your relation, I’m very sure! Happy wedding anniversary. 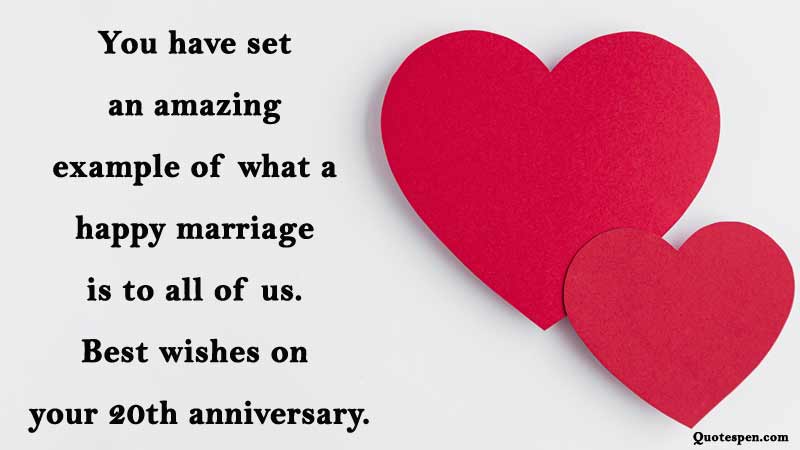 You have set an amazing example of what a happy marriage is to all of us. Best wishes on your 20th anniversary.

I wanted to send you big, heartfelt congratulations on your very special 20th anniversary. This is a once-in-a-lifetime experience.

Send heart-warming 20th wedding anniversary wishes quotes to your husband. It will help you to say true love feelings to him.

We’re born alone, we live alone, we die alone. Only through our love and friendship can we create the illusion for the moment that we’re not alone. Happy 20th anniversary day my love!

My love, we have been together for more than 20 years today, and I am so happy that you’re still around. Happy 20-year anniversary my love, and I hope that you’ll always be happy and cheerful.

Today marks our 20-year anniversary. It’s one worth celebrating, with stories of our love for each other even stronger than before. Cheers to us, my dear.

Our 20-year anniversary today would not have been possible without your love and support. I’m always grateful for your presence and sacrifices for us. 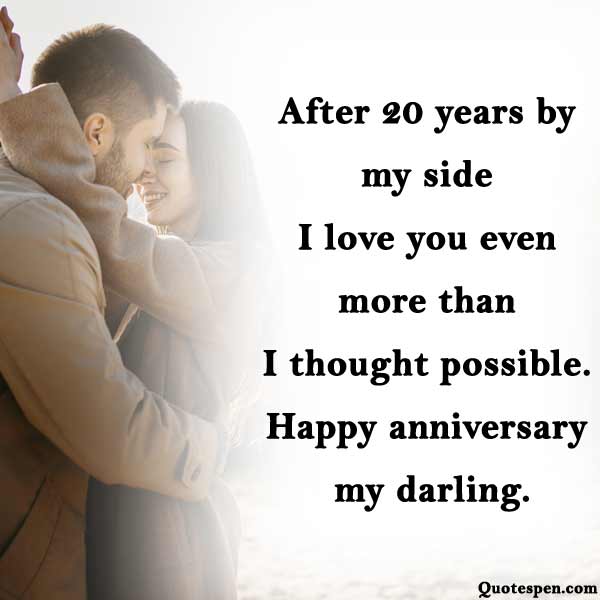 After 20 years by my side, I love you even more than I thought possible. Happy anniversary my darling.

Happy Anniversary! I cannot imagine how boring my life would be without you! I don’t even know what I would do without you.

Happy Anniversary, darling! I love you with my entire being and will always do. I love you, with the kind of love that’s more than love.

To my dearest husband – thank you for the happiest twenty years of my life. I can’t wait to spend the next twenty falling even more deeply in love with you

Happy 20th anniversary to you, my dear. You have stuck with me for so many years, entrusting me with your youth and everything else. I hope that I have been a partner deserving of everything you’ve given me so far.

Our 20-year anniversary is going to be a beautiful celebration with you around. Here’s to us, baby, here’s to us being together for decades and decades.

They say that people enter into your life for a specific purpose. I know now that I found you because I needed to see how beautiful life can be. Happy Anniversary! 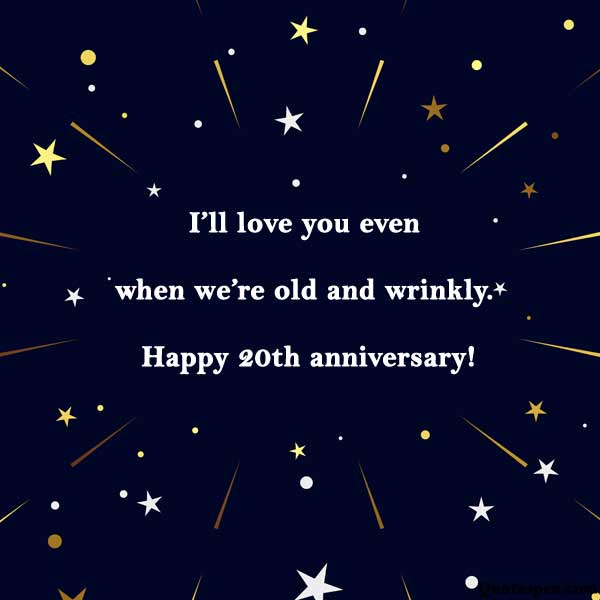 I’ll love you even when we’re old and wrinkly. Happy 20th anniversary!

You have been the most remarkable wife on earth, more fabulous and stronger than superwoman. And on this special day, I want you to feel and see how a blessed husband I am. I love you, sweetheart. Happy anniversary.

20 years is a long time to be married. We now have our own children, almost ready to start living their own lives apart from us. I love you, I love us, and I love everything that we had together as a married couple.

Happy 20th wedding anniversary to you my dearest. You have always been a beautiful person to me, inside and out. Even another 20 years from today, you will still be just as beautiful.

20 years ago when I told you that I was going to love you forever, I was not kidding. I hope that our 20 year anniversary today has proved it to you quite some!

You have made me a better person by loving me for who I am. Thank you for being there for me always. Happy anniversary darling!

Happy anniversary, mom and dad! Thanks a lot for being not only the best parents but also the best friend. You have taught us that happiness depends on trust, love, and sacrifice.

Happy 20 years of marriage Mom & Dad. You have shown the World how love and dedication can make a relationship a long way. It’s been a blessing to be the children of such a loving parent! 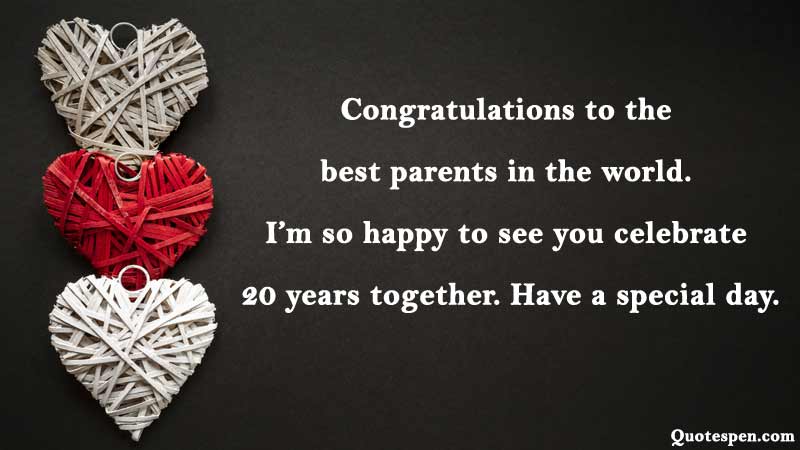 Congratulations to the best parents in the world. I’m so happy to see you celebrate 20 years together. Have a special day.

You have proven to everyone that there’s no perfect marriage. But an imperfect marriage can still be the happiest, strongest, and most loving marriage. I’m so proud of you, mom and dad. Happy anniversary!

My incredible parent, happy wedding anniversary! I’m lucky to have grown up in this house where the main root is love. You both make me believe in marriage. You are the parents that everyone would like to have. Always stay together and be very happy!

Congratulations to my amazing parents. Together you have shown what true love really is. I am inspired and in awe of how perfect you are together. Have a truly great anniversary.

Dear mom and dad, I hope you enjoy your anniversary and know just how much I admire all you’ve to create together. Thank you for being such awesome parents

Οn this special day, Best wishes go to you; This wonderful love that you share, lasts your lifetime through. Happy 20th Anniversary to My dear sister.

Best wishes to both of you on your wedding anniversary. May the love you share last your lifetime. May you be blessed with many more beautiful sons and daughters. Happy 20th Anniversary Sister.

Best wishes to sister and brother-in-law, your love remains the same and you are a wonderful pair. Happy 20th wedding anniversary to Sister and Brother in Law.

Love is what I learned from you, Trust is what I saw in you, Incredible marriage is of you two, Where you both are one, even though it looks two!!! Happy 20 Year wedding anniversary! 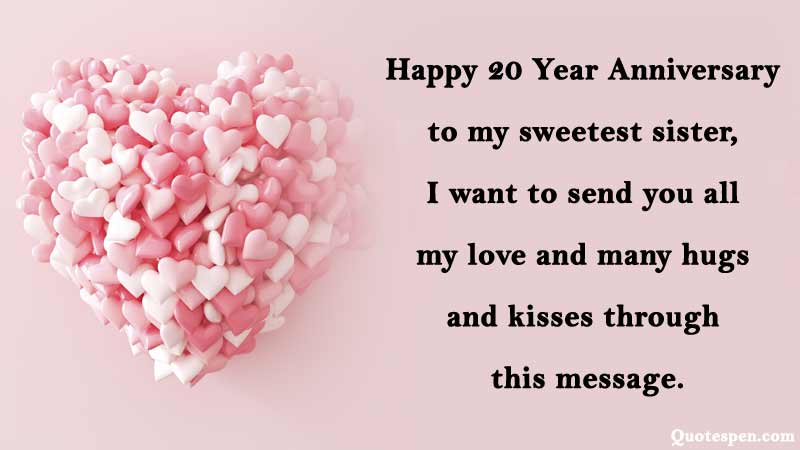 Happy 20 Year Anniversary to my sweetest sister, I want to send you all my love and many hugs and kisses through this message.

Best wishes from a loving and caring brother/sister on this wedding anniversary of yours. Be happy and joyful.

My sister and Jiju are the loveliest people who can pamper me endlessly. Lots of love to you both on your anniversary.

Happy Anniversary to my sweetest sister, I want to send you all my love and many hugs and kisses through this message. 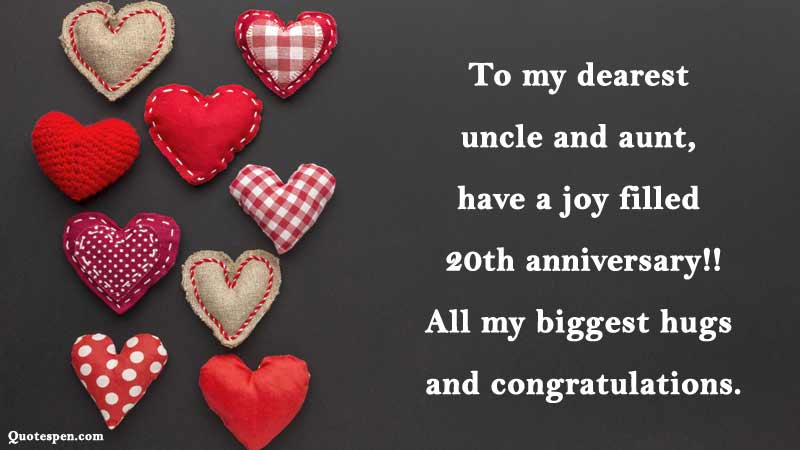 To my dearest uncle and aunt, have a joy-filled 20th anniversary!! All my biggest hugs and congratulations.

To my loving uncle and aunty – have a wonderful 20th anniversary. It makes me happy to see you both so happy.

Congratulations on 20 years and wishing you lots more happy years by each other’s side.

Love kept you together for all these years and made my childhood awesome. Thank you for being the perfect couple. Happy anniversary.

Congratulations to the funniest and friendliest Uncle and Aunty in this world on their happy anniversary. I love you both!

You two have always been the pillars that held our lives Today we celebrate the day that you two joined your hearts together forever Happy anniversary.

Your anniversary is also a day of thanksgiving because of the year that has passed and the challenges that have been overcome. Thank you for loving each other and giving us a happy family. Happy 20th anniversary!