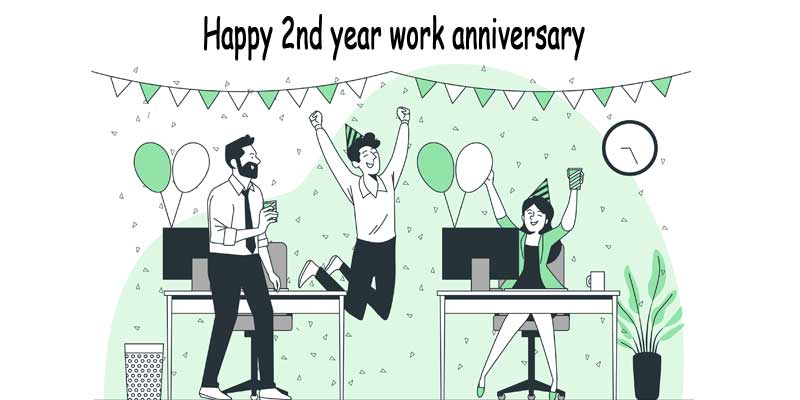 2nd year work anniversary is a significant milestone for everyone. It is the perfect time for the employee to recheck what they learned and achieved in the last 2 years and if the employee is satisfied with their role then they keep working for the company with the same dedication.

Second work anniversary quotes for employees are a great way to acknowledge their hard work over the past years. You can also thank them for their contributions to the organization or your department.

Nobody here can do what you do. You are confident, knowledgeable, and loyal. Thank you for being who you are. Thank you for the past 2 years. Happy Work Anniversary

This is to remind you that you have come a long way, and your contributions have continued to inspire us. I wish you a very Happy 2nd Work Anniversary!

This company’s future is sure to be bright with team members like you! Your hard work and creativity are an inspiration to all of your colleagues. Happy 2nd Anniversary!

Hi Mate! I just wanted to thank you for everything you’ve done so far for our organization and the team. All though it’s too little compared to all the efforts you have put in throughout the years. I want to extend my/our heartiest wishes on your work anniversary. 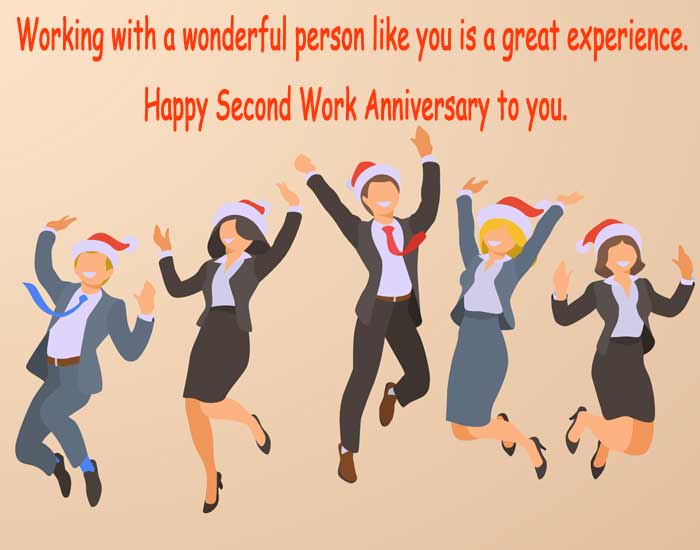 Working with a wonderful person like you is a great experience. Happy Second Work Anniversary to you.

Happy second work anniversary! It seems as if you joined yesterday and today it’s one year. Hope to work with you for more years. Wishing you all the best.

Happy 2nd Anniversary! We are so proud to have you as part of the team, and hope that you keep up the good work for many years to come!

I cannot tell you how grateful we are to have you among us and for your wonderful contribution. Happy 2nd Work Anniversary.

Congratulations on your work anniversary. We’re proud to have a coworker like you in our team who came along with his talents and commitment on this day.

You have worked here for 2 years. All the co-workers are also amazed by your dedication to doing work. Thanks for delivering excellent output. Happy work anniversary to you!
Wishing the happiest work anniversary to the most diligent, determined, and dedicated person in the office. You are an outrageous source of inspiration for all of us. Savor the day!

You are the person we thought you were when you joined our team many years ago. Happy Work Anniversary and best wishes in the years to come!

Another anniversary — another exemplary year of exceeding all my expectations. I have no idea how you do it, but I can tell you I appreciate it more than words can say. Thank you for being amazing.

On your anniversary with the company, we want you to know what a pleasure it is to work with someone so driven and dedicated as you are. Thank you for being such an important asset to our team.

Congratulations on your 2nd work anniversary. We’re proud to have a coworker like you on our team who came along with his talents and commitment on this day.

Wishing heartiest congratulations for the work anniversary to the most hard-working person ever. You are the best.

You are truly a valued associate! Thank you for your fervent efforts and creativity. Happy anniversary. 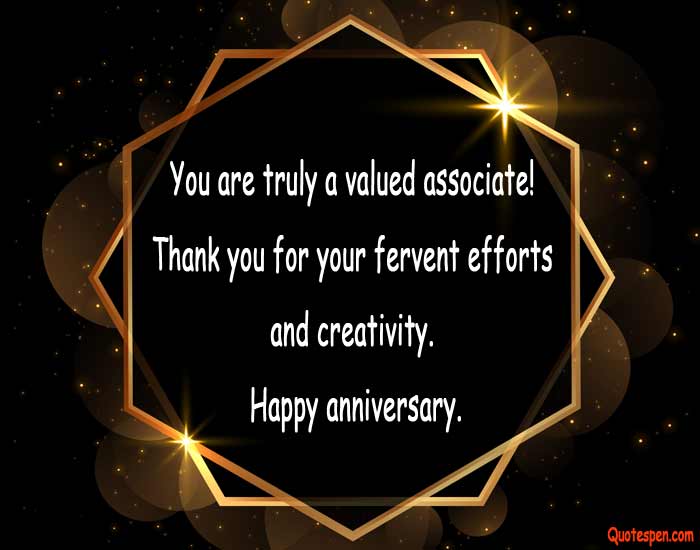 I knew that is going to be very much successful in your life when I met you for the very first time. Happy anniversary and thank you for everything.

Many congratulations on your happy work anniversary! May you accomplish more successful working years with this organization. Wish you good luck.

Even though in the starting I was not sure whether you would stay longer but you did. Congratulation on your one-year work anniversary! May you go ahead in your career always!

Your simplicity is the reason why you are so loved by your teammates. We all adore you so much. Happy anniversary to you!

Sending you my heartfelt wishes on your happy work anniversary. No wonder time flies. But I’d like to work with such a nice co-worker for more working years.

We would absolutely hang out with you even if we weren’t compensated.

Thank you for always, always making each year better than the last. I can say with absolute certainty that you inspire everyone you work with. We all feel so grateful to have you on our team.

Your best quality may be your positivity. There’s no question it rubs off on everyone around you. Thank you for contributing to this positive energy.

You’re a great co-worker who makes the workplace out of boredom. Know my best wishes for your impressive achievement. Happy work anniversary.

You are a source of inspiration and positivity which makes these 2 years colorful, fun, and full of success. Happy 2nd work anniversary to you. 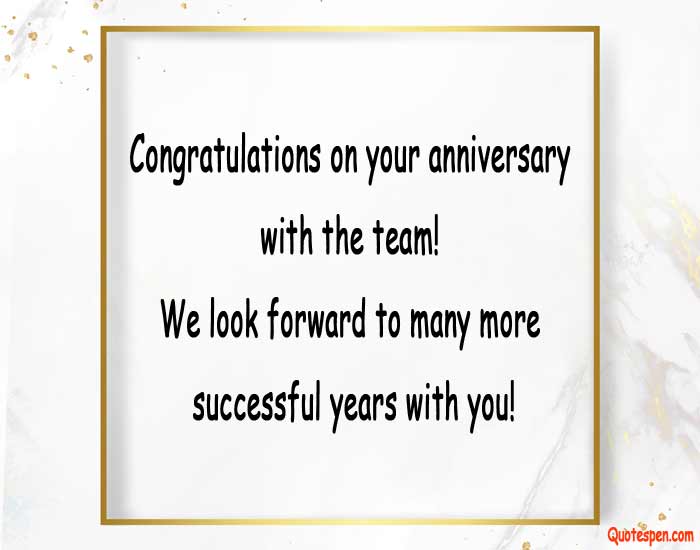 Congratulations on your anniversary with the team! We look forward to many more successful years with you!

Thank you for being such a valuable member of the team. I wish you continued success in your career. Happy Anniversary!

Don’t let this whole Work Anniversary thing go to your head. We all had to start somewhere. Just wait until you’ve been here as long as I have.

On the anniversary of your time with us, it’s clear to us all that you’ve become so much more than that! Thank you for everything you do!

We wish you all the best for your 2nd anniversary and we are hoping that you will stay for another 10 to 15 years because you are the best colleague we can ask for.

Working with a colleague like you was always a blast and looking forward to feeling that all again for another year. Happy second work anniversary!

You are an insanely knowledgeable person. You are an asset to the company. Best wishes on your third year work anniversary! 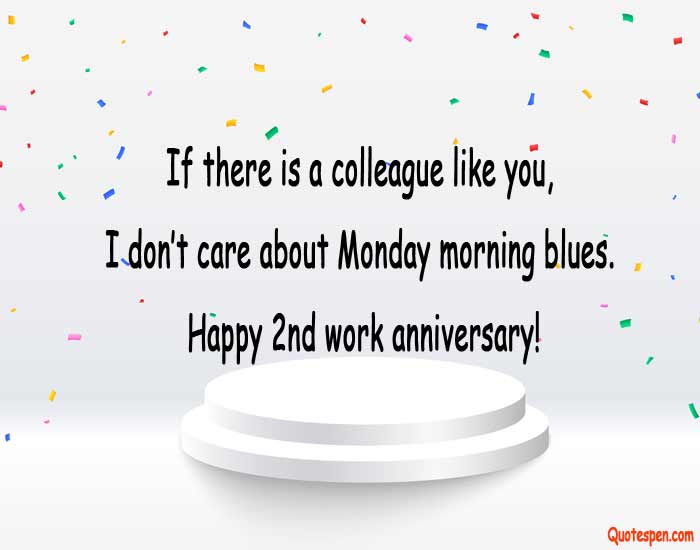 If there is a colleague like you, I don’t care about Monday morning blues. Happy 2nd work anniversary!

I congratulate you on getting promoted on your anniversary day. We wish lots of blessings and happiness to you.

Sending heartfelt wishes to the best colleague that I ever had. Congratulation on your 2nd work anniversary. Looking forward to more years of working together.

Dear Boss, today is your 2nd work anniversary and if you work today it would be considered a serious felony. May you continue to guide us and support us at crucial moments.

Happy work anniversary to the best boss ever!

We feel lucky and glad to be a part of your team. Your exceptional leadership is beyond words. Happy second work anniversary.

Hey employer, do you want to appreciate and wish your employee on completing a second year in your organization? Below you will find meaningful and significant work anniversary quotes with images.

I hope the above wishes quotes are helpful for you. If you like our collection then don’t forget to share it on your social profiles.