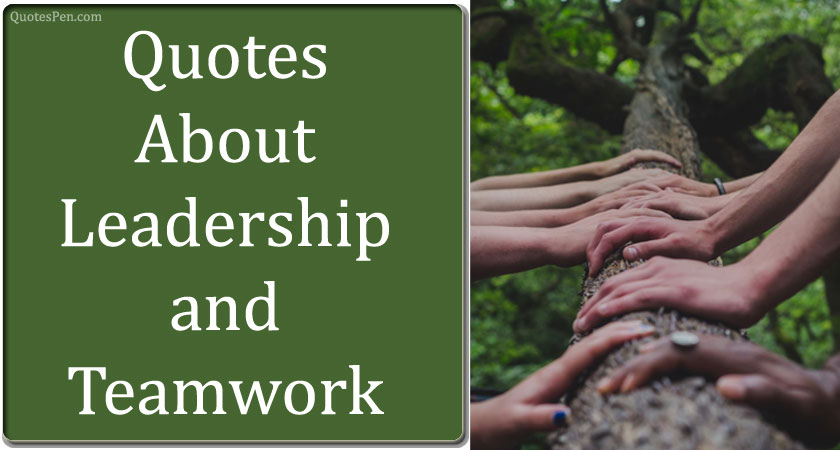 Leading a team is not an easy task. To do this one must have certain abilities. Not everyone can bring leadership skills themselves. Leadership ability in itself can bring only those who are motivated for it. If you also want to learn leadership and teamwork then you have come to the right article. Because in today’s article we have brought quotes about Leadership and Teamwork. Through these quotes, you will inspire yourself to awaken the ability of a leader in you. So let’s move further to the article.

Such a person can never become a leader who wants to take the credit for all the work alone. He has to give credit to his team as well. Leadership is not an ordinary person standing in the crowd, but to be a leader, there should be such abilities that make you stand out and important in the crowd. Similarly, there are many abilities for leadership, and knowing about which will be able to increase the ability of leadership in you. Leadership is not such an easy task. But if you want to get this skill then here we have brought quotes about leadership and teamwork through which you will be able to learn how to become a leader. By reading this, you will get the importance of teamwork and the motivation to lead the team. Let’s take a look at the below quotes.

Quotes About Leadership And Teamwork 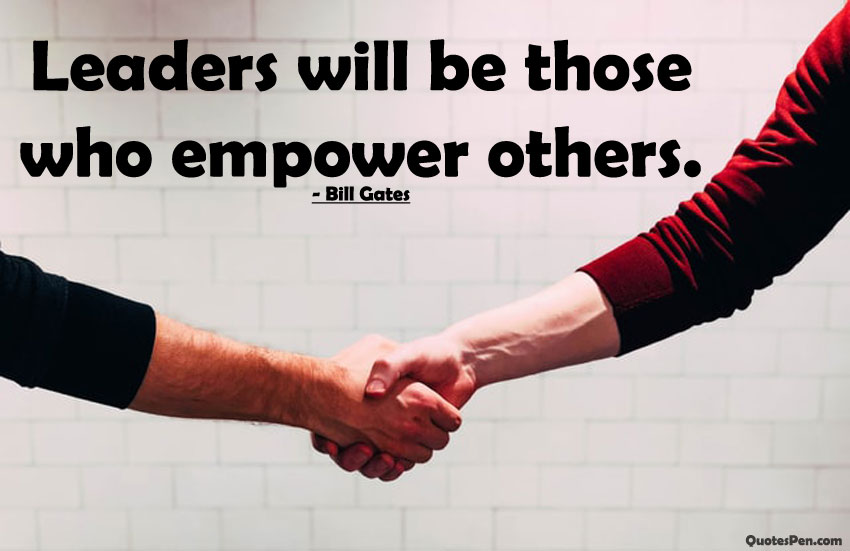 Leaders will be those who empower others. – Bill Gates

No man will make a great leader who wants to do it all himself or to get all the credit for doing it. – Andrew Carnegie

If your actions inspire others to dream more, learn more, do more, and become more, you are a leader. – John Quincy Adams

We all need people who will give us feedback. That’s how we improve. – Bill Gates 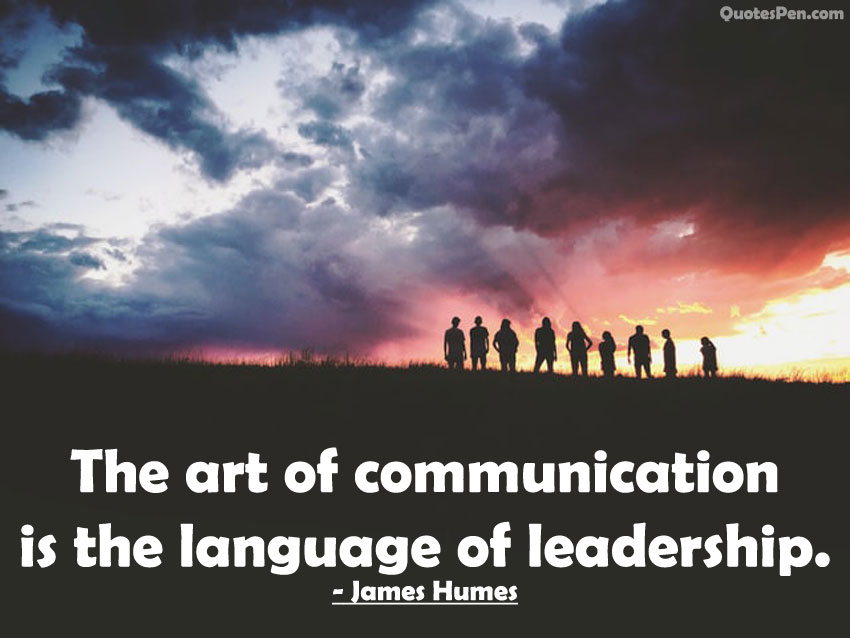 The art of communication is the language of leadership. – James Humes

Outstanding leaders go out of their way to boost the self-esteem of their personnel. If people believe in themselves, it’s amazing what they can accomplish. – Sam Walton

An example is not the main thing in influencing others. It is the only thing. – Albert Schweitzer

I have always believed that the way you treat your employees is the way they will treat your customers and that people flourish when they are praised. – Richard Branson

None of us is as smart as all of us. – Ken Blanchard

No one can whistle a symphony. It takes a whole orchestra to play it. – H.E. Luccock

If everyone is moving forward together, then success takes care of itself. – Henry Ford

It takes two flints to make a fire. – Louisa May Alcott

Unity is strength. . . when there is teamwork and collaboration, wonderful things can be achieved. – Mattie Stepanek

To me, teamwork is the beauty of our sport, where you have five acting as one. You become selfless. – Mike Krzyzewski

Remember, teamwork begins by building trust. And the only way to do that is to overcome our need for invulnerability. – Patrick Lencioni

The best teamwork comes from men who are working independently toward one goal in unison. – James Cash Penney

I invite everyone to choose forgiveness rather than division, teamwork over personal ambition. – Jean-Francois Cope

You don’t need a new plan for next year. You need a commitment. – Seth Godin

Focus on being productive instead of busy. – Tim Ferriss 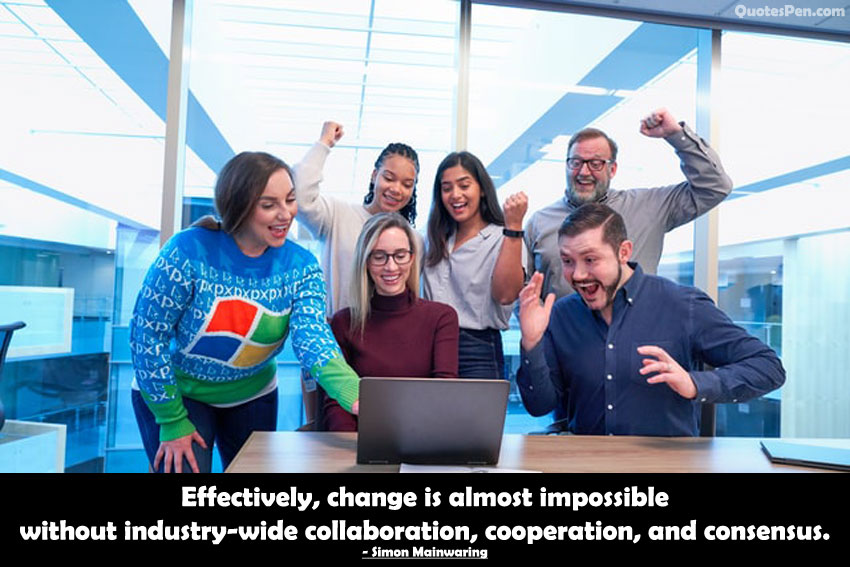 The value of achievement lies in the achieving. – Albert Einstein

Individual commitment to a group effort—that is what makes a team work, a company work, a society work, a civilisation work. – Vince Lombardi

If you can laugh together, you can work together. – Robert Orben

Efficiency is doing better that what is already being done. – Peter Drucker

Good management consists in showing average people how to do the work of superior people. – John Rockefeller 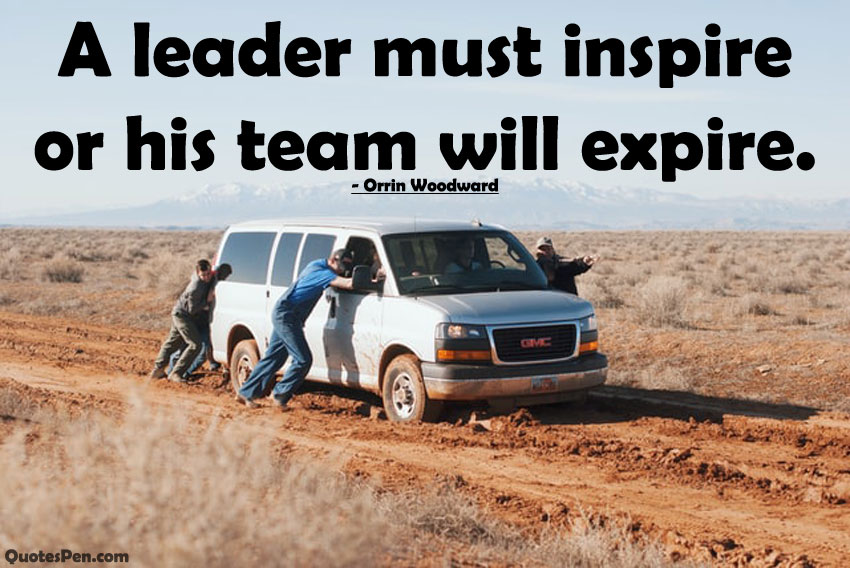 A leader must inspire or his team will expire. – Orrin Woodward

No one can whistle a symphony. It takes a whole orchestra to play it. – HE Luccock

A successful team is a group of many hands and one mind. – Bill Bethel

Leadership is much more an art, a belief, a condition of the heart, than a set of things to do. – Max De Pree

It is literally true that you can succeed best and quickest by helping others to succeed. – Napoleon Hill

The ratio of We’s to I’s is the best indicator of the development of a team. – Lewis B Ergen

Team-building is so important that it is virtually impossible for you to reach the heights of your capabilities or make the money that you want without becoming very good at it. – Brian Tracy

Gettin’ good players is easy. Gettin’ ’em to play together is the hard part. – Casey Stengel 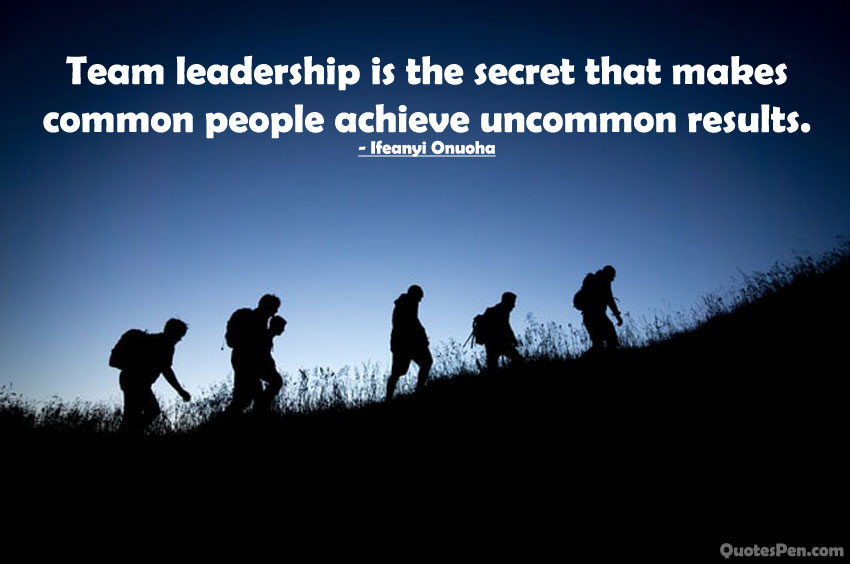 A group becomes a team when each member is sure enough of himself and his contribution to praise the skills of others. – Norman Shidle

Trust is knowing that when a team member does push you, they’re doing it because they care about the team. – Patric k Lencioni

No individual can win a game by himself. – Pele

Great things in business are never done by one person. They’re done by a team of people. – Steve Jobs 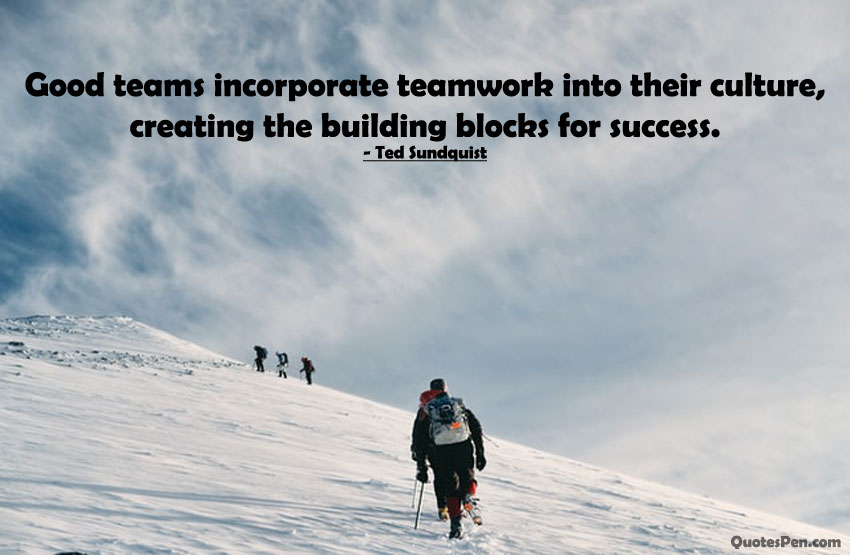 Great leaders are almost always great simplifiers, who can cut through argument, debate and doubt to offer a solution everybody can understand. – Gen. Colin Powell

Of all the things I’ve done, the most vital is coordinating those who work with me and aiming their efforts at a certain goal. – Walt Disney

Leadership and learning are indispensable to each other. – John F. Kennedy

Leadership is a matter of having people look at you and gain confidence, seeing how you react. If you’re in control, they’re in control. – Tom Landry

You don’t have to hold a position in order to be a leader. – Henry Ford

If you want to build a ship, don’t drum up the men to gather wood, divide the work, and give orders. Instead, teach them to yearn for the vast and endless sea. – Antoine de Saint-Exupery 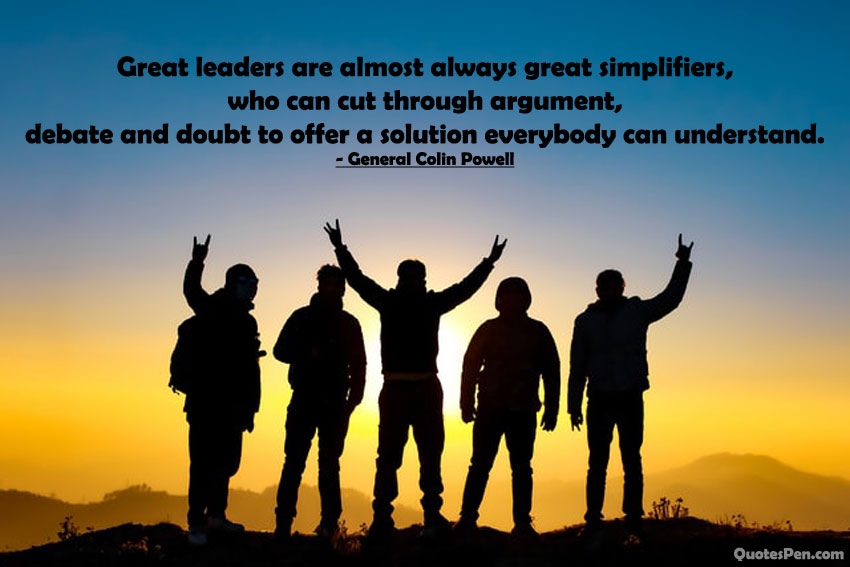 Great leaders are almost always great simplifiers, who can cut through argument, debate and doubt to offer a solution everybody can understand. – General Colin Powell

To be a leader, you have to make people want to follow you, and nobody wants to follow someone who doesn’t know where he is going. – Joe Namath

A genuine leader is not a searcher for consensus but a molder of consensus. – Martin Luther King Jr.

The best executive is the one who has sense enough to pick good men to do what he wants done, and self-restraint enough to keep from meddling with them while they do it. – Theodore Roosevelt

Perfection is not attainable, but if we chase perfection we can catch excellence. – Vince Lombardi 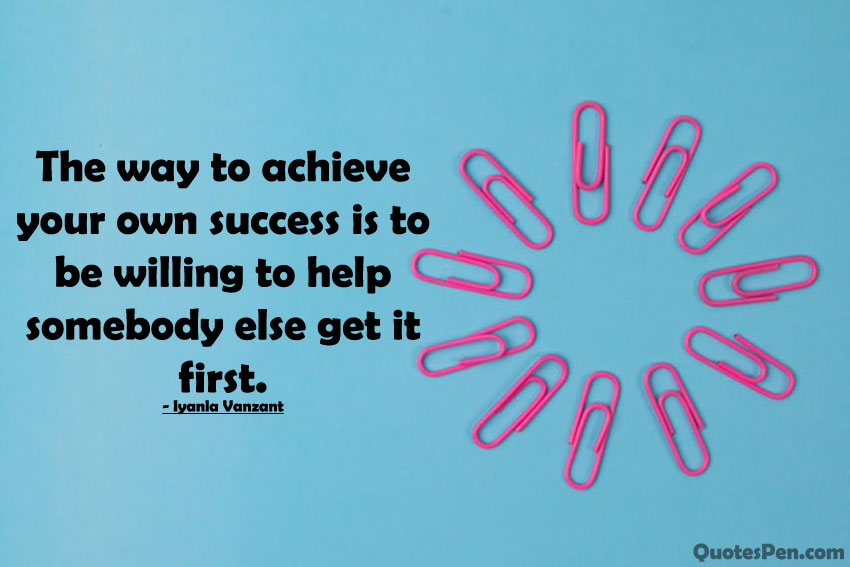 The way to achieve your own success is to be willing to help somebody else get it first. – Iyanla Vanzant

Famous Quotes About Leadership And Teamwork

If you want to lift yourself up, lift up someone else. – Booker T. Washington 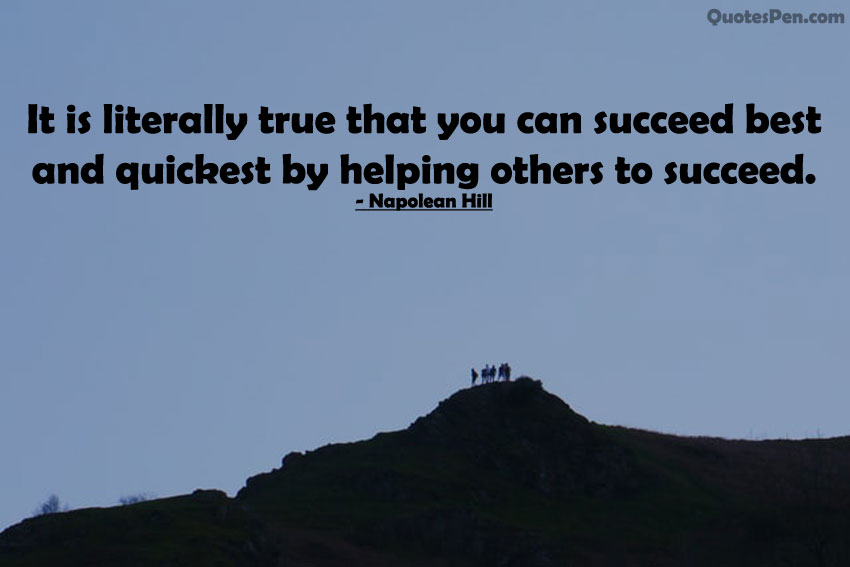 It is literally true that you can succeed best and quickest by helping others to succeed. – Napolean Hill

Strong and cohesive teams thrive when leaders highlight how much they all have in common, not how much he or she stands above from the crowd. – Moira Alexander

Teamwork begins by building trust. And the only way to do that is to overcome our need for invulnerability. – Patrick Lencioni 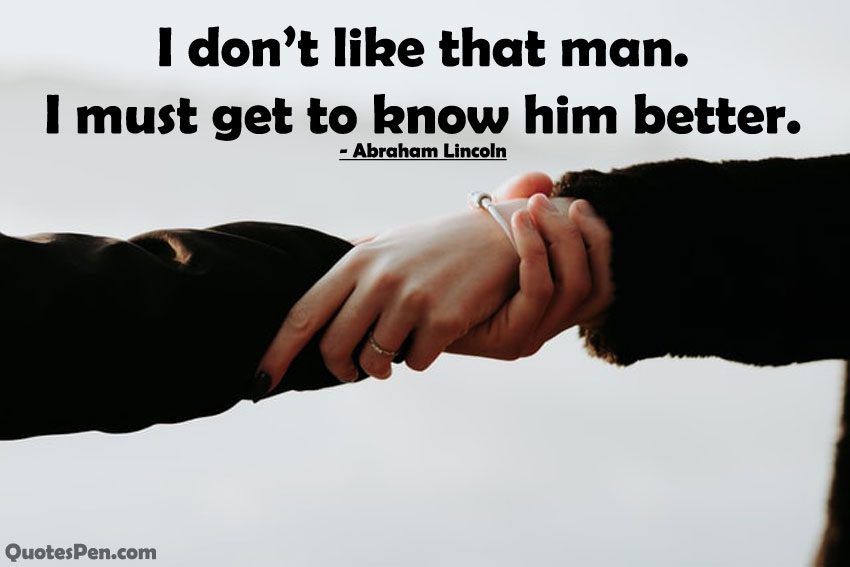 I don’t like that man. I must get to know him better. – Abraham Lincoln

Synergy – the bonus that is achieved when things work together harmoniously. – Mark Twain 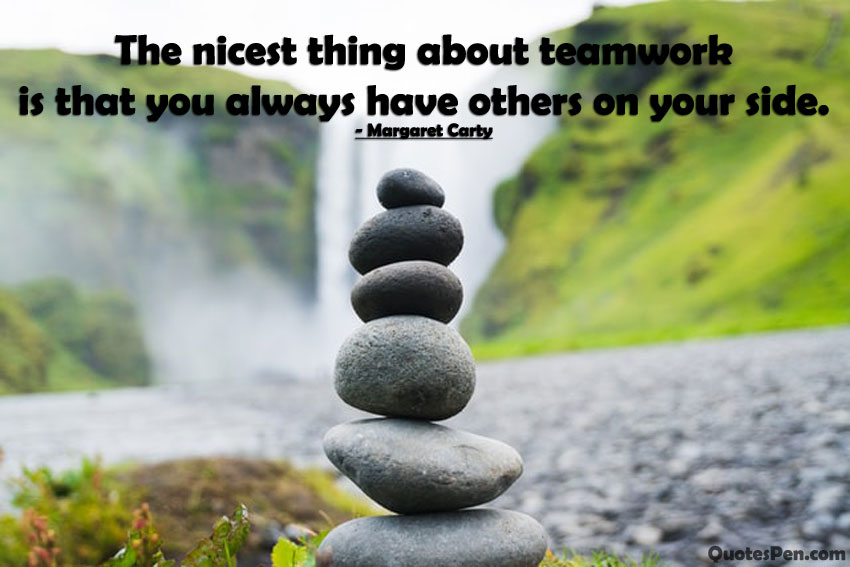 The nicest thing about teamwork is that you always have others on your side. – Margaret Carty

Teamwork is a make or break situation. Either you help make it or the lack of it will break you. – Kris A. Hiatt

If you take out the team in teamwork, it’s just work. Now who wants that? – Matthew Woodring Stover

None of us, including me, ever do great things. But we can all do small things, with great love, and together we can do something wonderful. – Mother Teresa 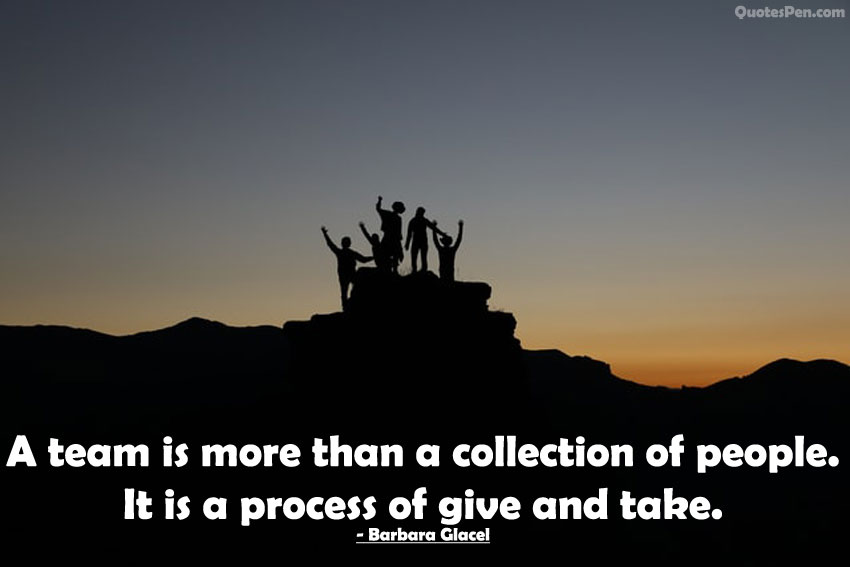 A team is more than a collection of people. It is a process of give and take. – Barbara Glacel

Motivational Quotes About Teamwork And Leadership

Find a group of people who challenge and inspire you, spend a lot of time with them, and it will change your life. – Amy Poehler

You don’t get harmony when everybody sings the same note. – Doug Floyd

Trust is the active engagement with the unknown. Trust is risky. It’s vulnerable. It’s a leap of faith…The more we trust, the farther we are able to venture. – Esther Perel

The world will be solved by millions of small things. – Pete Seeger 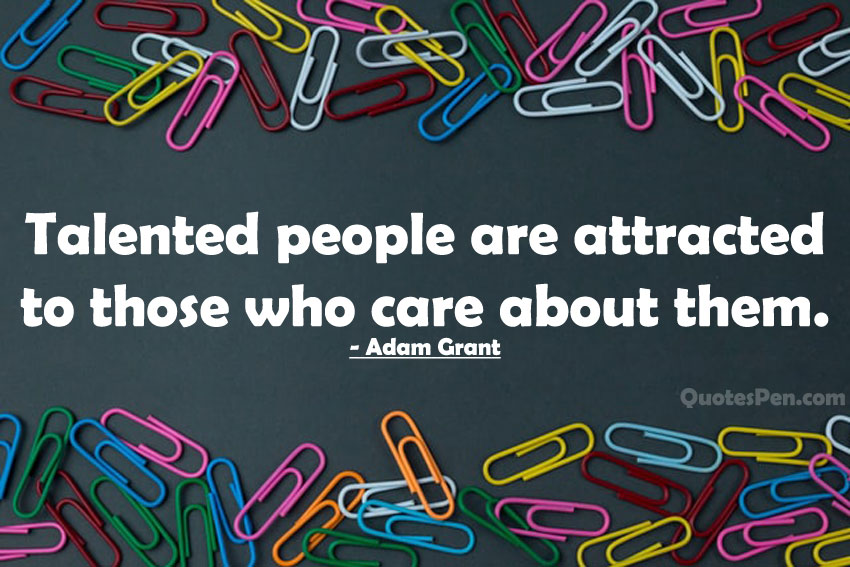 Talented people are attracted to those who care about them. – Adam Grant

If we were all determined to play the first violin, we should never have an ensemble. Therefore, respect every musician in his proper place. – Robert Schumann

No matter how brilliant your mind or strategy, if you’re playing a solo game, you’ll always lose out to a team. – Reid Hoffman

It is amazing how much people can get done if they do not worry about who gets the credit. – Sandra Swine

Great teams do not hold back with one another. They are unafraid to air their dirty laundry. They admit their mistakes, their weaknesses and their concerns without fear of reprisal. – Patrick Lencioni 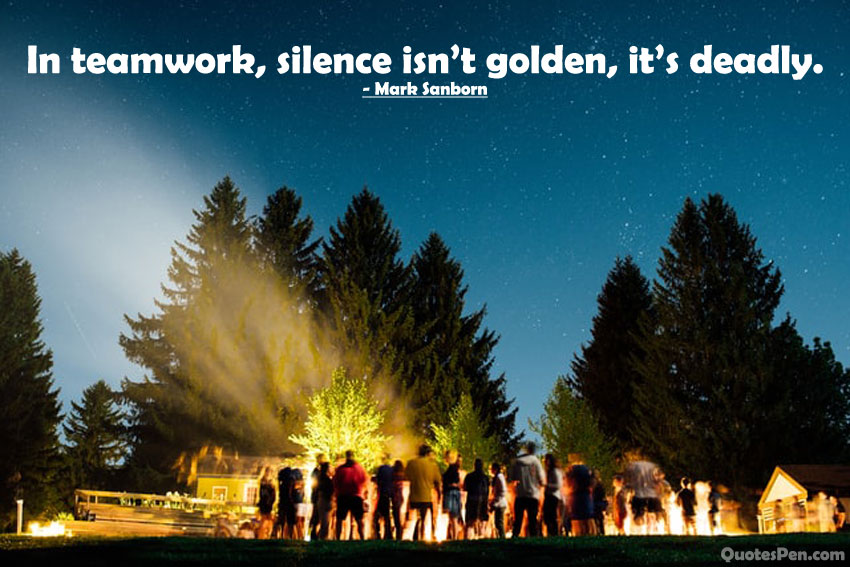 Leadership requires one to face problems fearlessly. A good leader guides his team, he can make the right decision at the right time. Leadership requires many abilities. There are many challenges in front of a leader. That is why one who wants to inculcate the spirit of leadership should be interested in facing challenges. Through the quotes written on leadership and teamwork in today’s article, you will be able to increase your ability to lead the team. We hope you liked this article. Do share it with other people through your social media platforms.