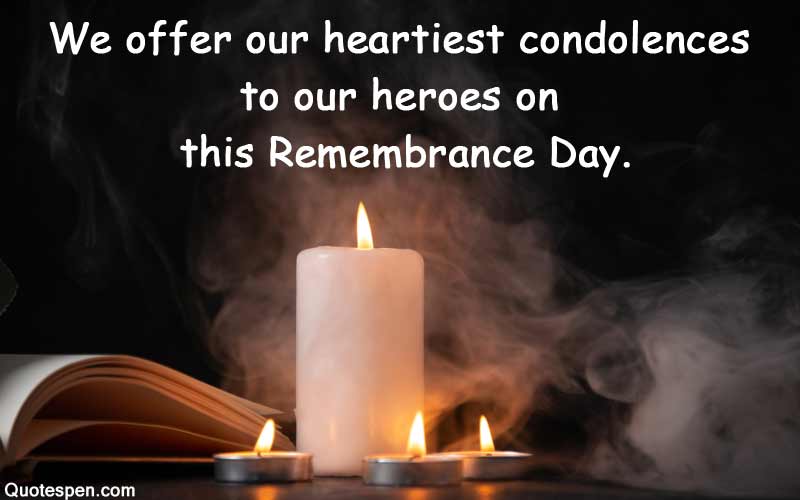 After four consecutive years of war, the moment came at 11 am on November 11, 1918, when the guns on the Western Front went silent. The Germans made an armistice to secure a peace deal. Special importance is given to the 11th hour of the 11th day of the 11th month. Because it was a moment when the First World War came to an end. Hostilities between the Allies and Germany ended on the Western Front.

This day is also known as ceasefire day. However later after world war II, the Australian government agreed to the United Kingdom’s proposal, and Armistice Day was renamed Remembrance Day in memory of those killed in both world wars. This day is dedicated to the soldiers who laid down their lives for their nation without worrying about their families. For the peace of the souls of such heroes and to pay tribute to them, this day is celebrated very well. On the first anniversary of the Armistice in 1919, a two-minute silence was observed as part of the main commemorative ceremony at the new Cenotaph in London. The parade is also held on this day and a minute’s silence is observed on the 11th hour of this day. Here there is the list of remembrance day quotes.

Remembrance Day is a timely reminder that, in what may be some of Britain’s darkest hours, it is the bravery of millions of ordinary people from all races, religions, and backgrounds that have kept our country’s flame burning and stood up for the values we hold dear. 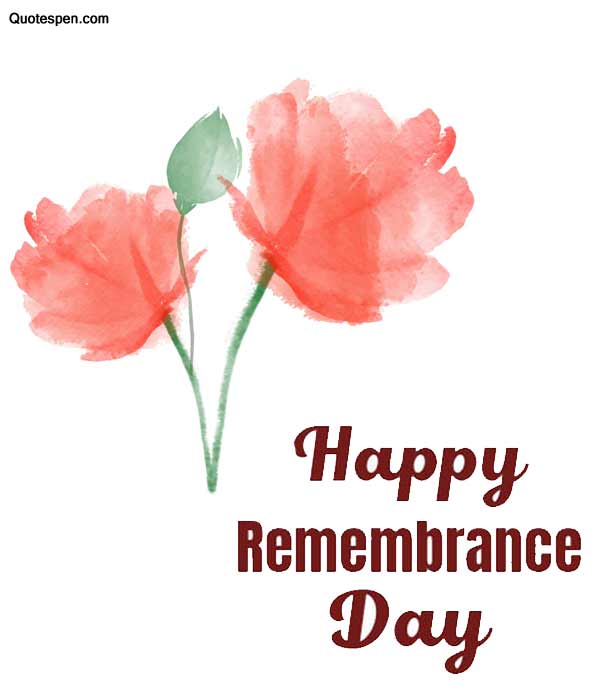 The legacy of heroes – the memory of a great name, and the inheritance of a great example. – Benjamin Disraeli

We shall want you and miss you but with all our might and main, we shall cheer you, thank you, kiss you when you come back again.

Heroism is not only in the man but in the occasion.

A hero is someone who has given his or her life to something bigger than oneself. – Douglas MacArthur

As we express our gratitude, we must never forget that the highest appreciation is not to utter words but to live by them. – John F. Kennedy

Regard your soldiers as your children, and they will follow you into the deepest valleys; look upon them as your own beloved sons, and they will stand by you even unto death.

If it seems a childish thing to do, do it in remembrance that you are a child. 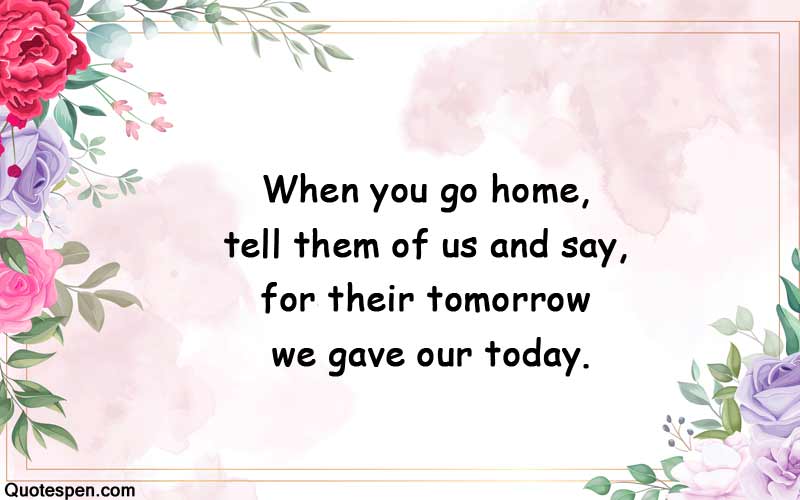 When you go home, tell them of us and say, for their tomorrow we gave our today.

Our nation owes a debt to its fallen heroes that we can never fully repay. – Barack Obama

There can be no dedication to Canada’s future without knowledge of its past.

And I’m proud to be an American, where at least I know I’m free. And I won’t forget the men who died, who gave that right to me. – Lee Greenwood

The legacy of heroes is the memory of a great name and the inheritance of a great example. – William Havard 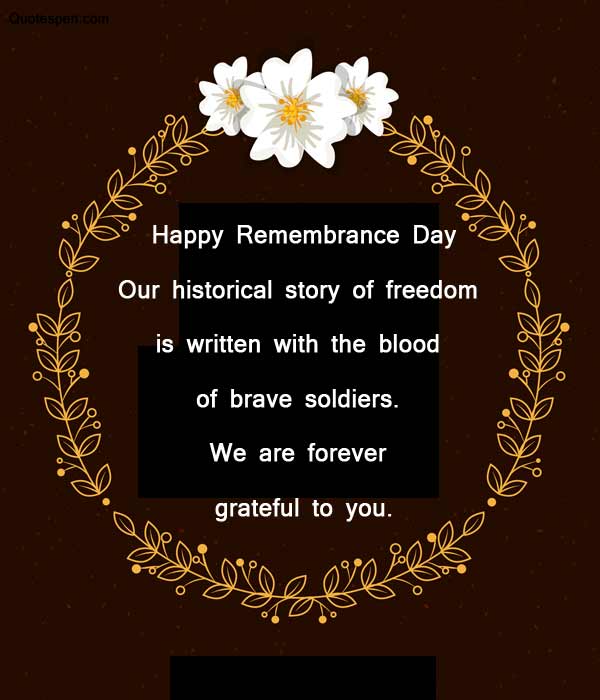 America without her soldiers would be like God without His angels. – Claudia Pemberton

I think of a hero as someone who understands the degree of responsibility that comes with his freedom. – Bob Dylan

Praising what is lost makes the remembrance dear.

Our warriors fought with the utmost bravery, which is why we commemorate Remembrance Day to remind the world of their bravery. 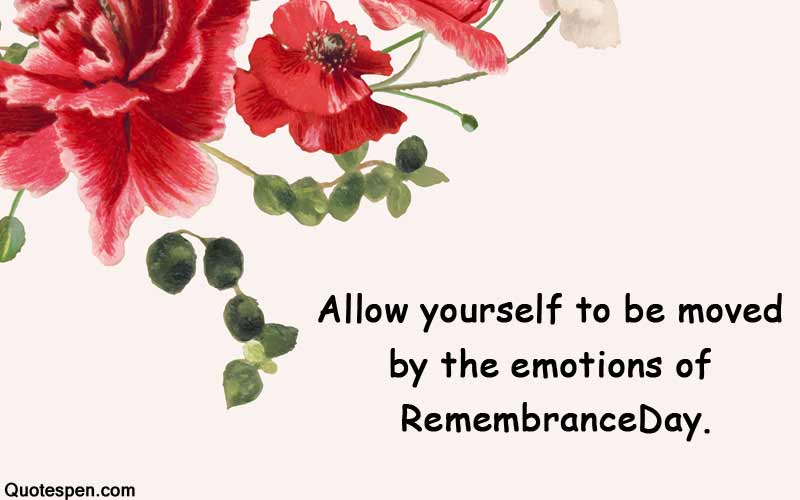 Remembrance Day is the day to give back love to those soldiers who loved our nation selflessly. May they always be in our prayers.

Best wishes on this Remembrance Day. Today, we pay tribute to those who have made the ultimate sacrifice for this nation.

Happy Remembrance Day. Let us make the most of today by counting our blessings and standing proud.

This is the day we pay homage to all those who didn’t come home. This is not Veterans Day, it’s not a celebration, it is a day of solemn contemplation over the cost of freedom.

Happy Veterans Day. Salute to all the veterans and thank you for all your sacrifices.

When the world turned its back on them, these courageous soldiers had the courage and confidence to stand tall. Paying our heartiest regard to them. 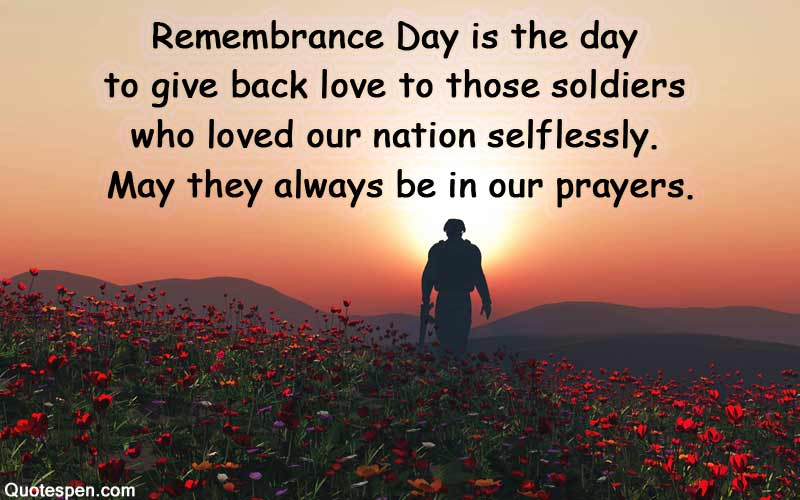 I believe, and I have always believed, that these events on the occasion of International Holocaust Remembrance Day should take place in Auschwitz and that this is the most important place to commemorate the victims of the Holocaust.

Happy Remembrance Day to you all. Let’s maintain a minute of silence and pay respect to the remembrance of our brave soldiers.

On this Remembrance Day, let us remember all those brave men and women who sacrificed their lives for the country.

We are forever grateful to these brave souls, and we swear to uphold their brave acts in the future.

They sacrificed their lives for this nation, let us take some time to honor all the soldiers on this Remembrance Day.

On this day of remembrance, I send you heartfelt greetings.

How important it is for us to recognize and celebrate our heroes and she-roes.

Remembrance Day Quotes To All The Deceased Soldiers

Honoring those who have sacrificed so much to keep our flag flying high. Thank you for everything you have done for this country.

Each of the martyrs is a hero because they prioritized the country over their own life. On this Remembrance Day, we are grateful to remember them. 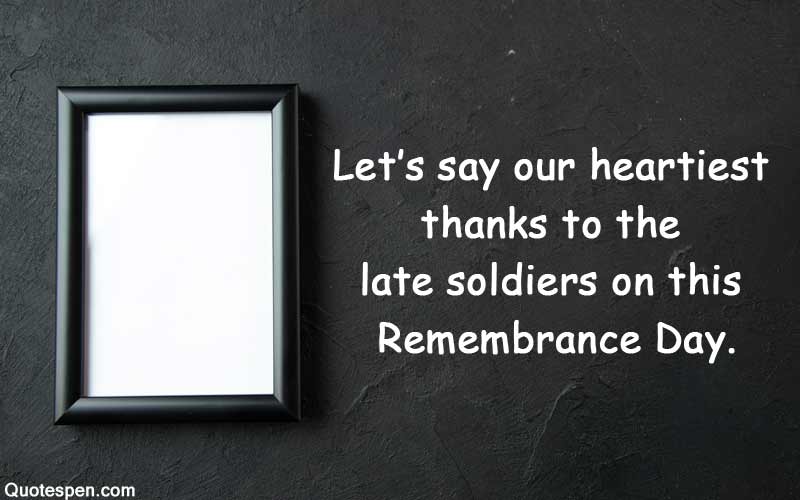 Let’s say our heartiest thanks to the late soldiers on this Remembrance Day.

The warriors’ outstanding names reflect the enormous heroism they have displayed for the country. We salute our heroes and say thanks on this Remembrance Day.

The purpose of Remembrance Day is to remind us of the valiant efforts of war soldiers.

We offer our heartiest condolences to our heroes on this Remembrance Day.

Without their great sacrifice, our safety and existence would be in constant jeopardy. We commemorate and honor all the heroic soldiers.

On this Remembrance Day, we pay tribute to the soldiers that they deserve.

Our historic story of freedom is written with the blood of the brave soldiers. We are forever grateful to you.

Courage is one of the most valuable gifts you can give to your country, and each of the victims gave it all.

Because of these martyrs, we are living proudly in the nation. Let us never forget them.

The martyrs are real patriots and the reason for this day of remembrance. We show gratitude to our fallen heroes.

More than 13 million people died in the war and every soldier who was martyred was a hero in his own right as he dedicated himself to his country. By giving importance to their country more than their life, they proved patriotic. That is why on this day these holy souls can be remembered by sending messages to each other.