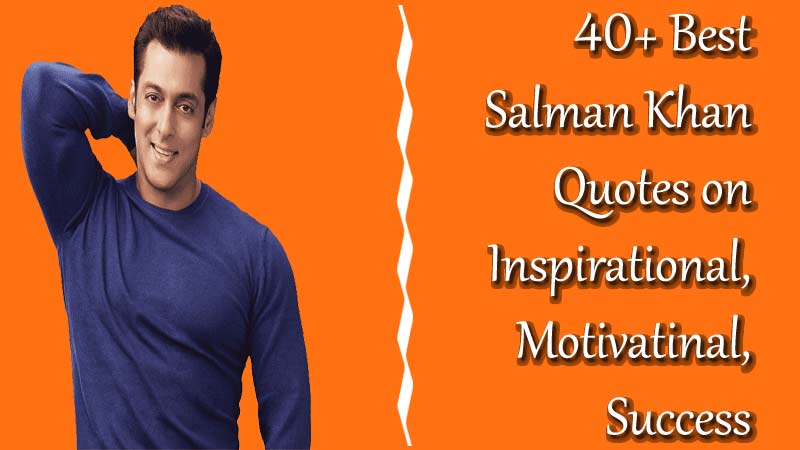 Improve your skills to become a superstar with Salman Khan Quotes:

Personal development is a way that can contribute to your satisfaction and success. Very few people build their development skills throughout their lives to reach their goals and to better themselves. Everyone can develop their skills in their fields like education, arts, entertainment, and advice from a mentor, self-help, and more. Here, we are going to look at the person, who developed his skills and achieved great success in his life, Salman Khan. Salman Khan is a serving role model who loves to become a superstar.

Who is Salman Khan?

Success is a term that is different from everyone’s perspective. The journey of Salman Khan in the Bollywood film industry is the best example that success does not come easily. Salman Khan born in a family with a film ground, most people think that he has made it easy, but that’s not true. Salman Khan started his acting debut in the film Biwi ho to Aisi in Bollywood as a supporting actor. He made a lead role in the movie Maine Pyar Kiya which is a romantic family drama that brought him in limelight. This film made a record at the box office at that time and also won him many awards. Salman Khan was recognized as a fine actor after the movie Maine Pyar Kiya.

After that movie, he started giving many box office hits continuously. Even though some of his movies were flop too, he used to be more consistent with his hard work and he never stopped working. To be successful in any field, one needs to be work hard and keep patience. Even after becoming the superstar he is punctual and works hard which makes him the top position in the industry. During his career, Salman Khan joined several charities. Being Human is an NGO run by Salman Khan, once he donated his bone marrow to save a little girl’s life. Even you are famous in your field, you should remain calm and maintain simplicity, just like Salman Khan. 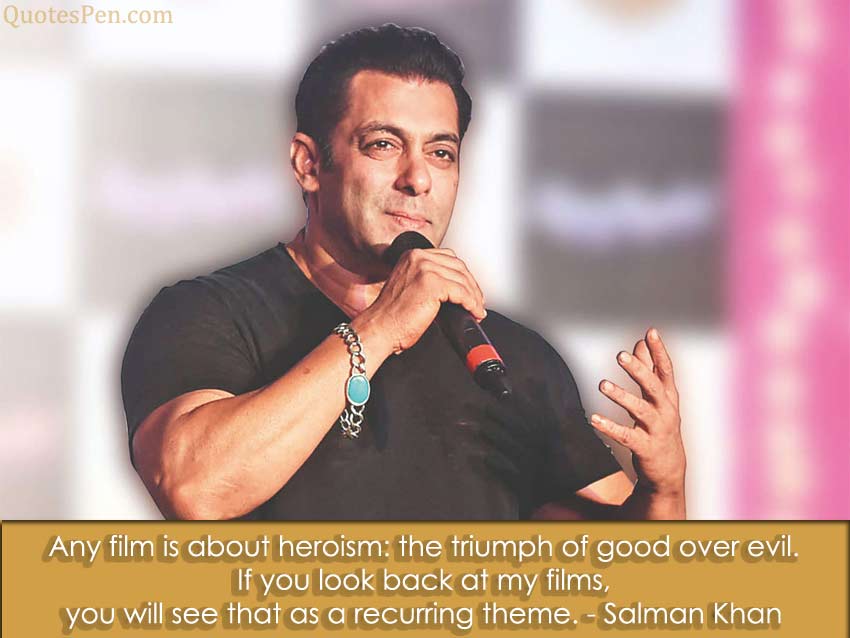 Any film is about heroism: the triumph of good over evil. If you look back at my films,
you will see that as a recurring theme. – Salman Khan 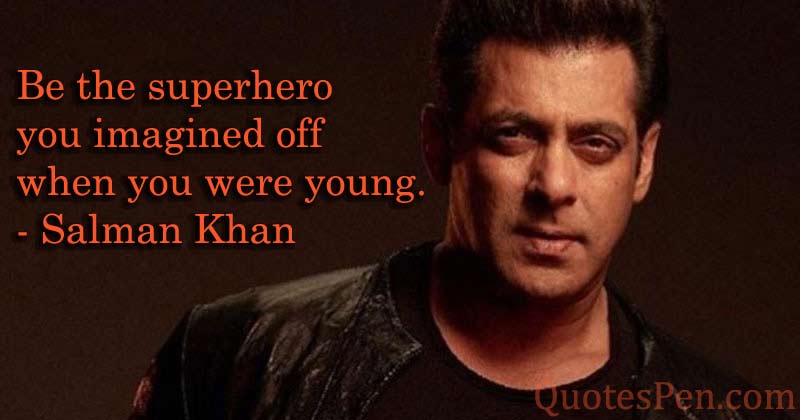 Be the superhero you imagined off when you were young. – Salman Khan 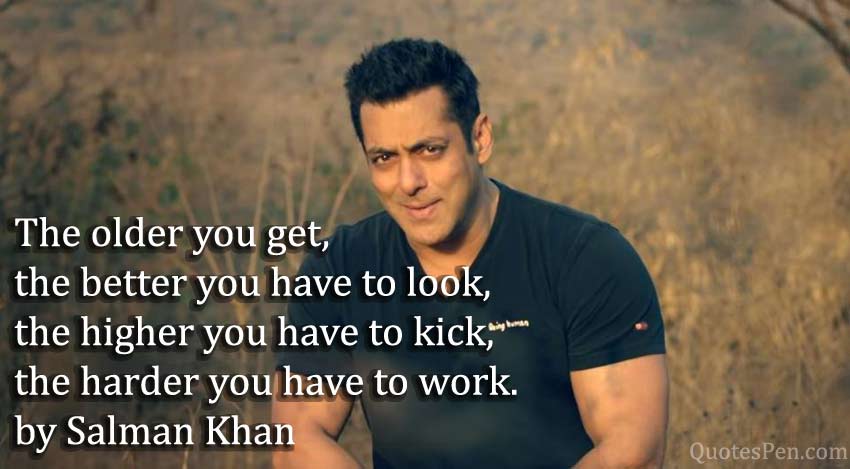 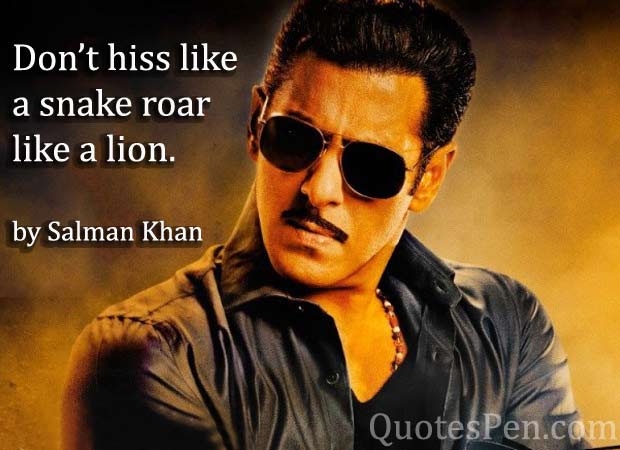 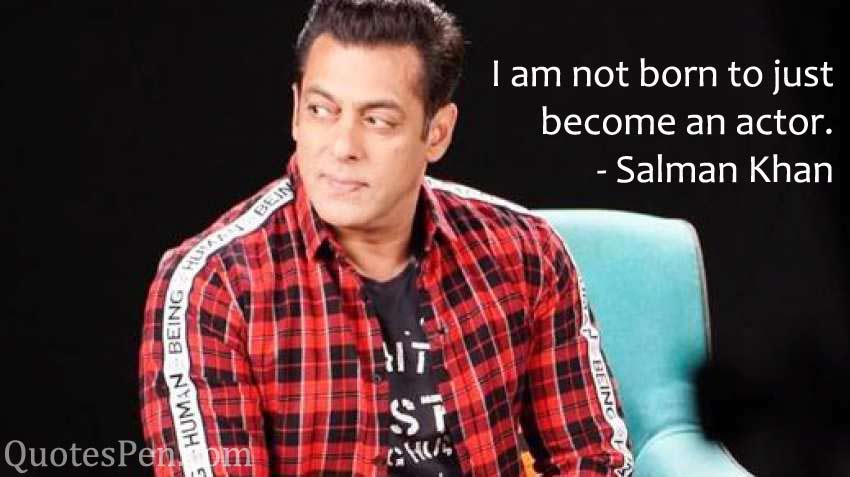 I am not born to just become an actor. – Salman Khan 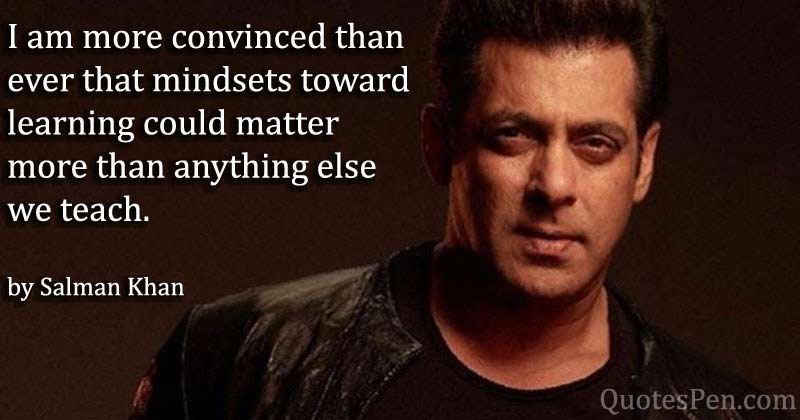 I am more convinced than ever that mindsets toward learning could matter more than anything else we teach. – Salman Khan 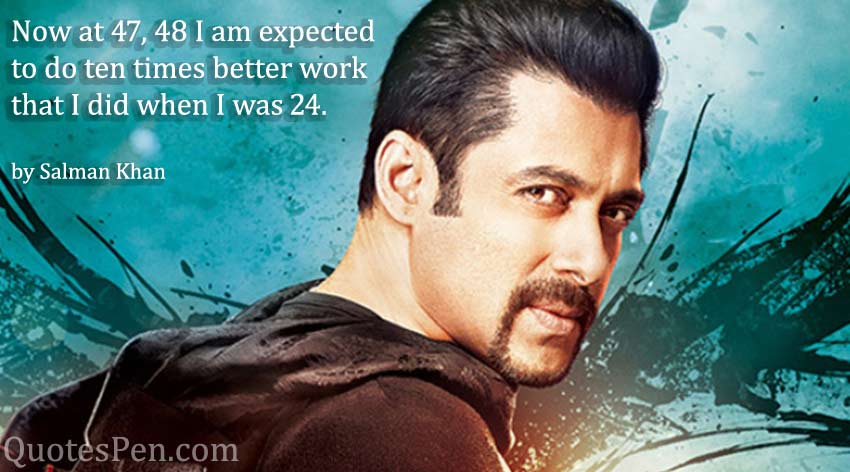 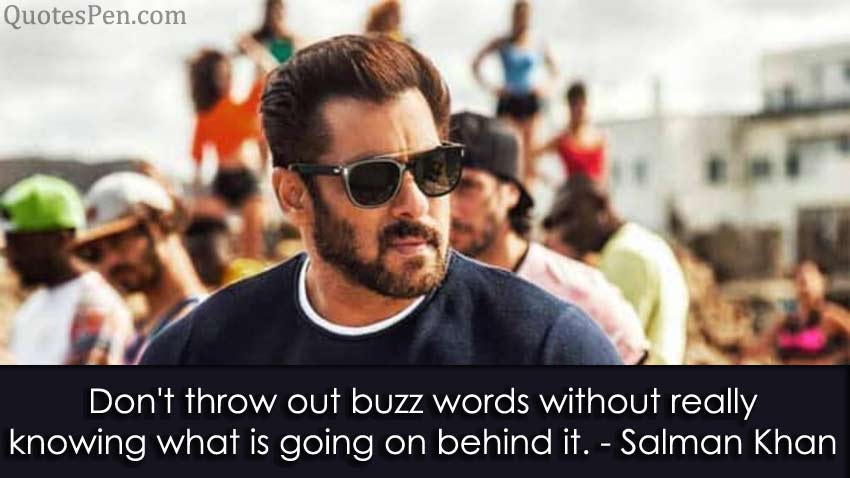 Don’t throw out buzz words without really knowing what is going on behind it. – Salman Khan 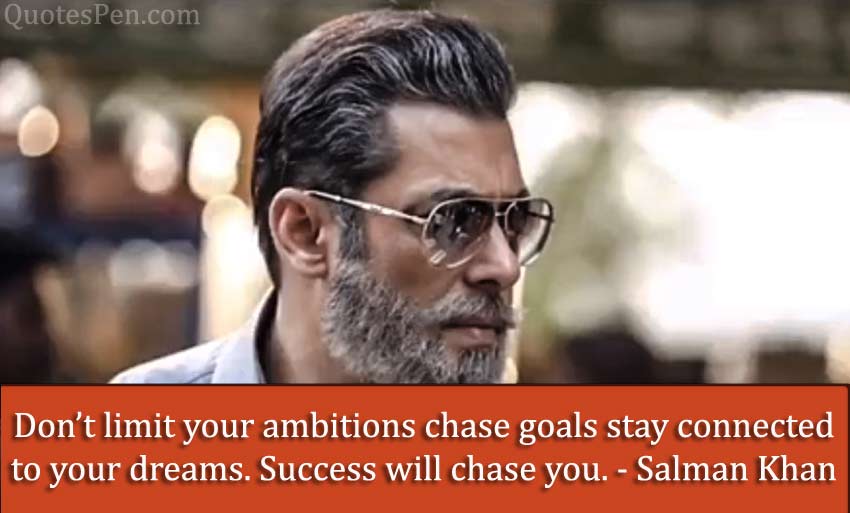 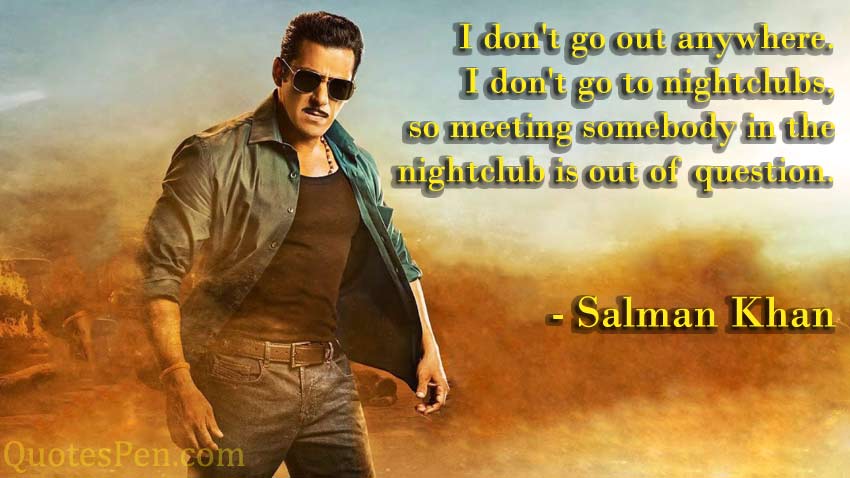 I don’t go out anywhere. I don’t go to nightclubs, so meeting somebody in the nightclub is out of question. Salman Khan 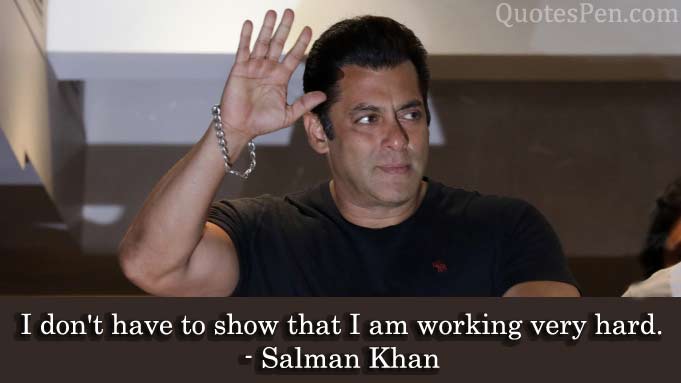 I don’t have to show that I am working very hard. – Salman Khan 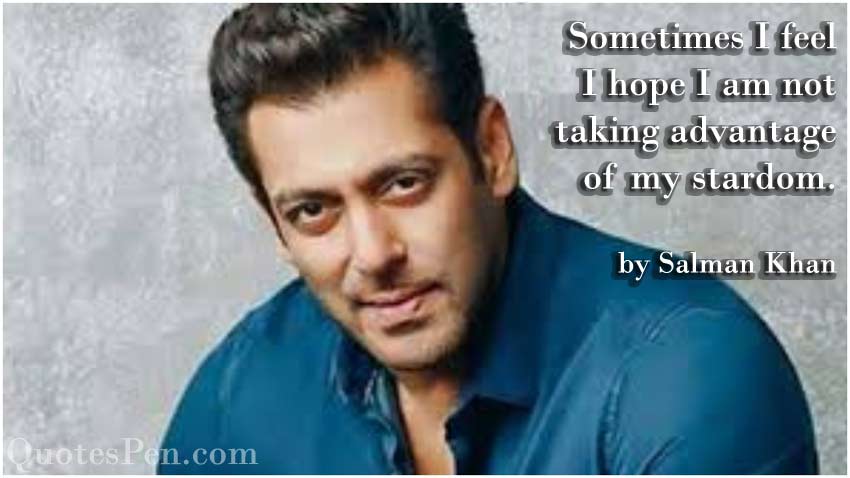 Sometimes I feel I hope I am not taking advantage of my stardom. Salman Khan 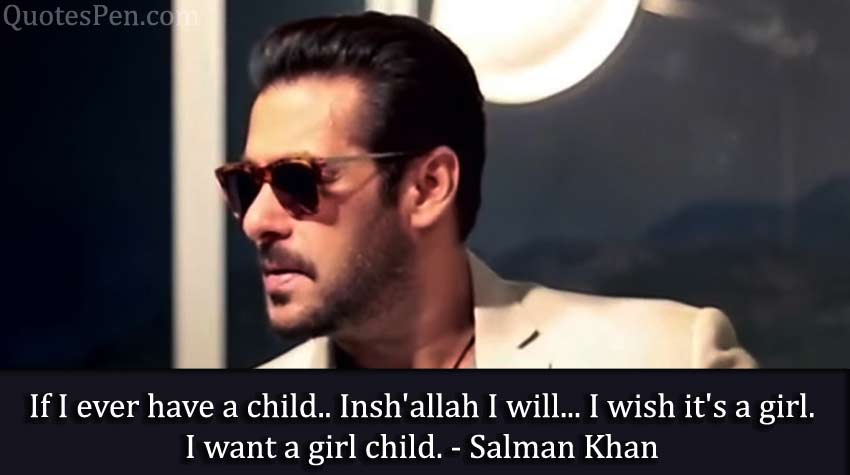 If I ever have a child.. Insh’allah I will… I wish it’s a girl. I want a girl child. – Salman Khan 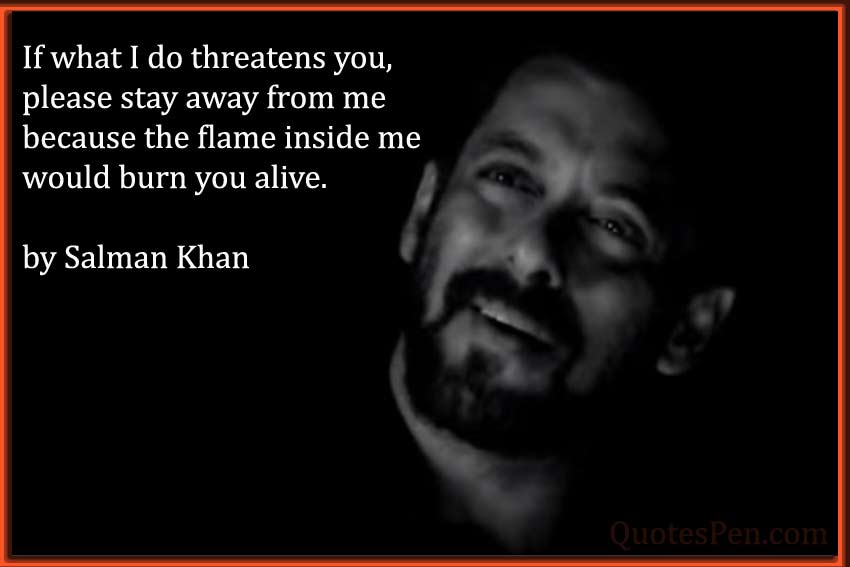 If what I do threatens you, please stay away from me because the flame inside me would burn you alive. – Salman Khan 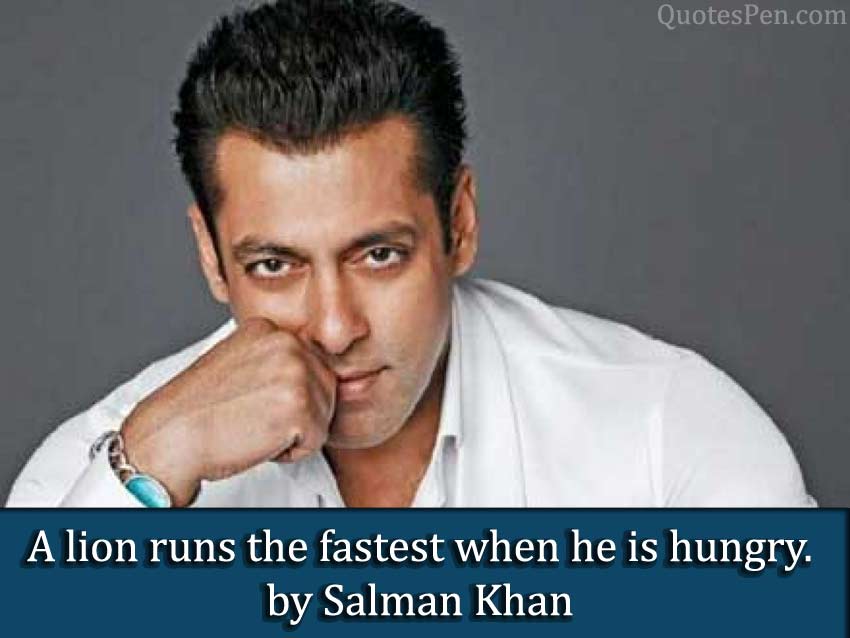 A lion runs the fastest when he is hungry. – Salman Khan 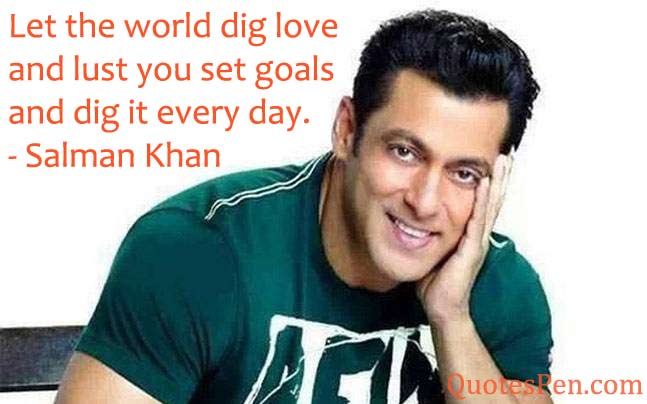 Let the world dig love and lust you set goals and dig it every day. Salman Khan 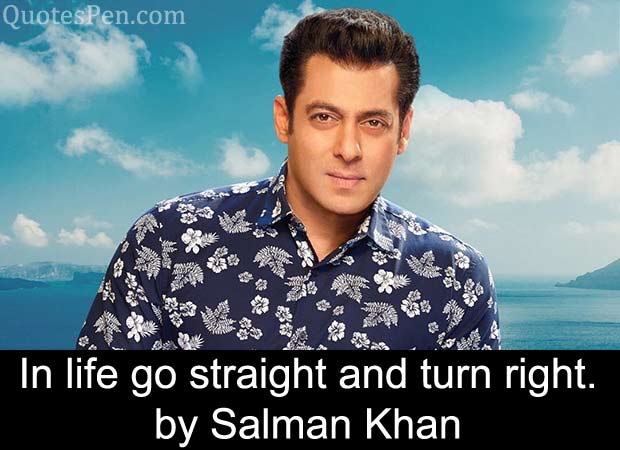 Sometimes, love marriages don’t work and arranged marriages do and sometimes, it’s the other way around. – Salman Khan

With every film, I try and give the audiences a little more than the previous film in terms of comedy, action, drama, and so on. – Salman Khan

Cinema should always be in touch with the soil of the country. My films celebrate the heartland of India. – Salman Khan

If the film is a hit then everyone shares the success. If it is going to be a disaster then it might as well be because of me, not because of somebody else. – Salman Khan

The day the producers aren’t minting money, or the fans are done with me and, most of all, I was a person get bored of acting, I will stop and pursue my other interests. There is a lot to do: painting, writing, direction. – Salman Khan

The best time to release a film is on a festive date like Divali or Eid, or at a time when there are no big films three to four weeks before or after. – Salman Khan

I enjoy the process of composing music. The first time I hear a song, it has to bring a smile to my lips. You have to tap your feet and be able to sing the song. – Salman Khan

I was close to getting married a long time ago. But it didn’t happen, and since then it has not been happening. It is jinxed, and I am very happy. I hope this jinx continues. Salman Khan

All fashion brands are about looking good. Being Human is also about doing good. And you can do good by the simple act of slipping into a t-shirt or a pair of jeans. – Salman Khan 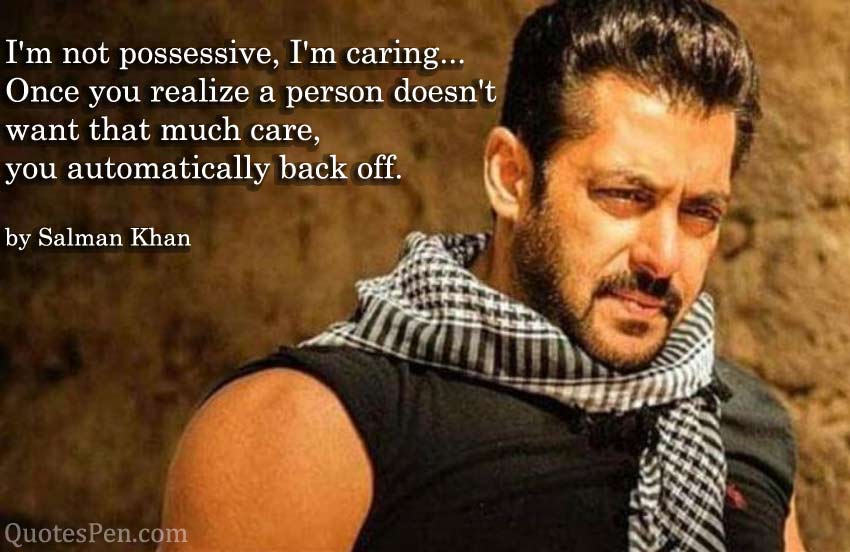 I’m not possessive, I’m caring… Once you realize a person doesn’t want that much care,
you automatically back off. – Salman Khan

I guess I don’t take my stardom too seriously. I think I am one of the guys. Salman Khan 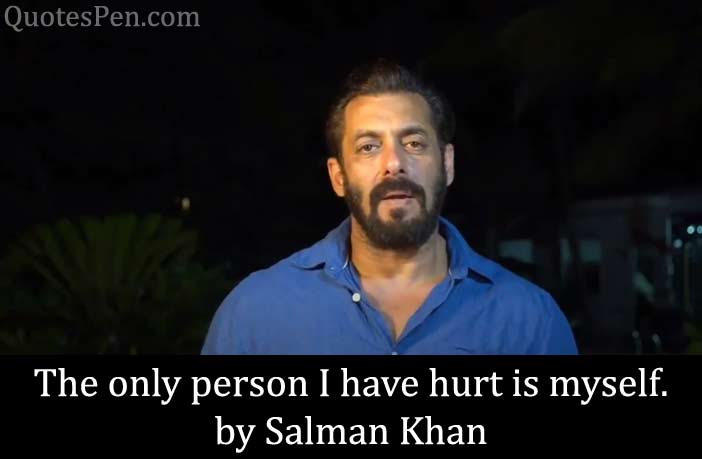 The only person I have hurt is myself. – Salman Khan 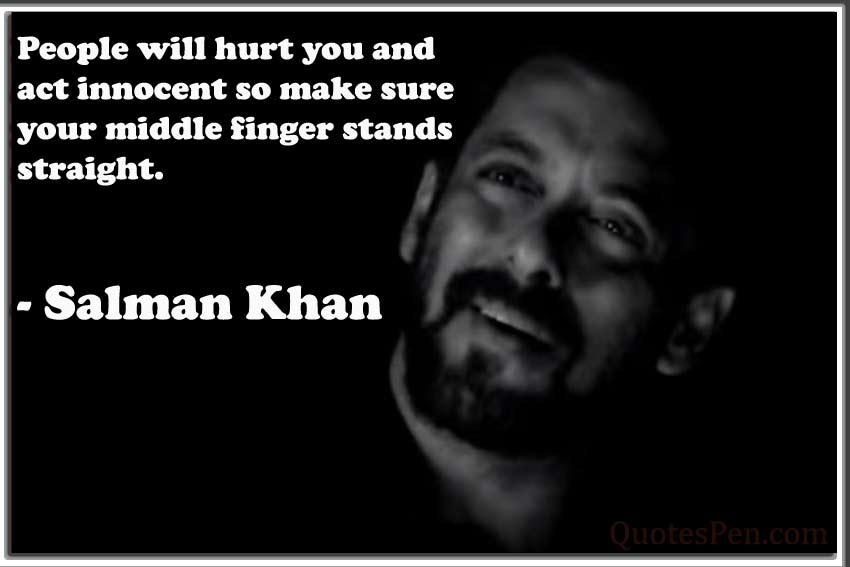 People will hurt you and act innocent so make sure your middle finger stands straight. – Salman Khan 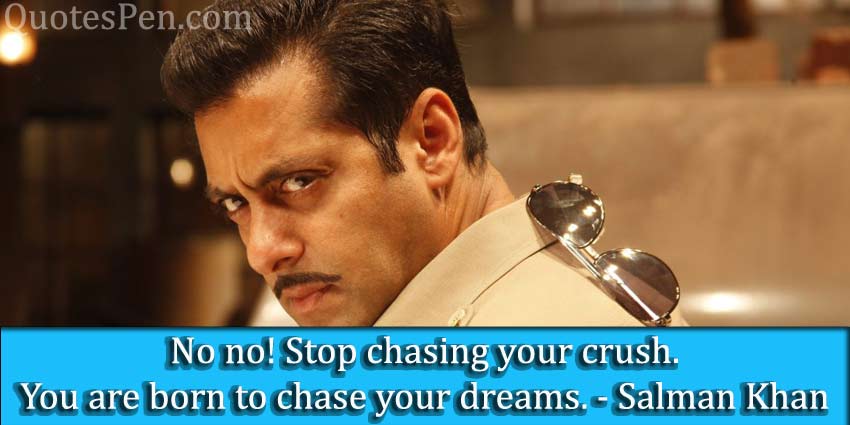 No no! Stop chasing your crush. You are born to chase your dreams. Salman Khan 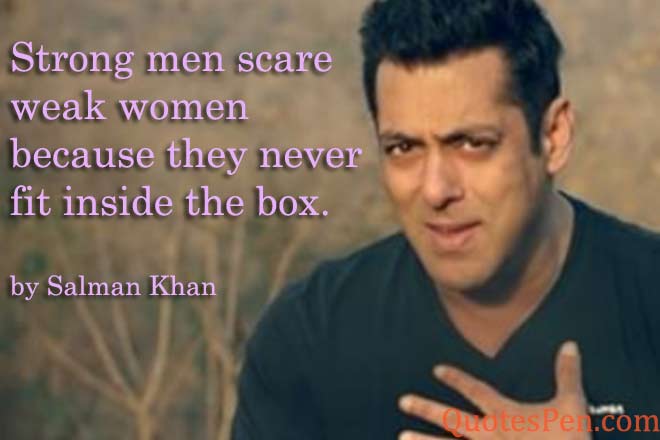 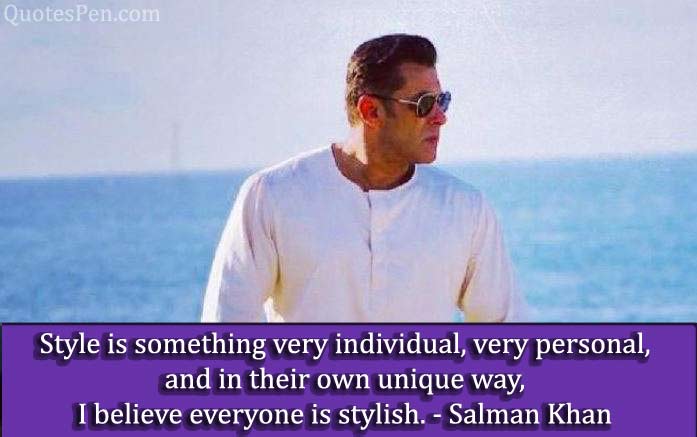 Style is something very individual, very personal, and in their own unique way,
I believe everyone is stylish. – Salman Khan Why should I marry? One marries to have children, but I already have children!
My nieces and nephews are my children. – Salman Khan 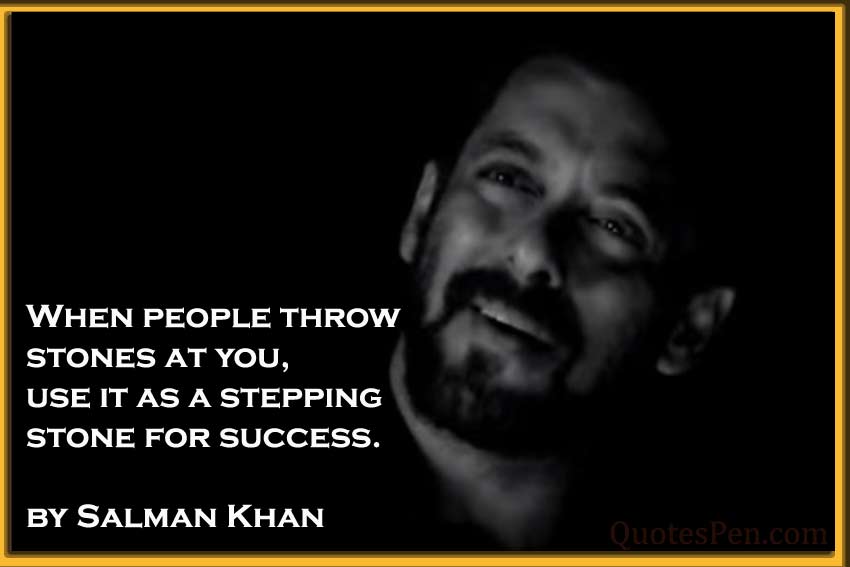 When people throw stones at you, use it as a stepping stone for success. Salman Khan There are people who want awards because it changes the perception of the audience.
But I’m not into all that. – Salman Khan 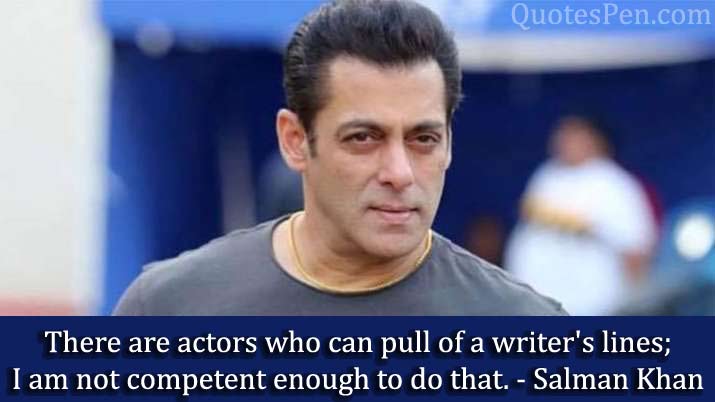 There are actors who can pull of a writer’s lines; I am not competent enough to do that. – Salman Khan 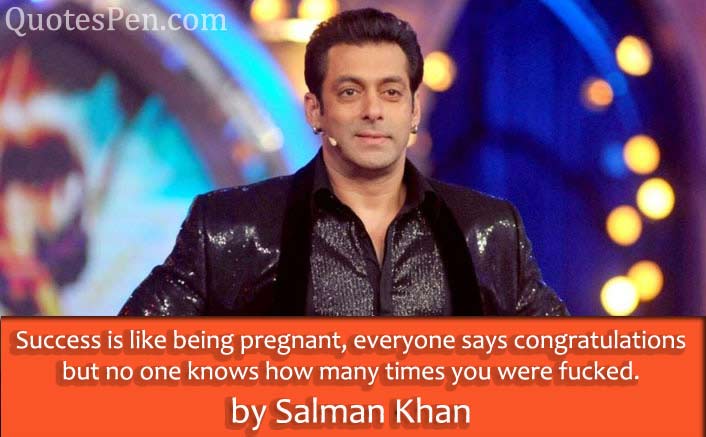 Success is like being pregnant, everyone says congratulations
but no one knows how many times you were f*ucked. – Salman Khan

Life gives everyone a lot of opportunities in different aspects. One who used the opportunity in the right way will always succeed in his life. Salman Khan is the best example of this quote. Salman Khan worked as an assistant director after he came out of St. Xavier’s College in Mumbai. He also even tried his hand in the field of modeling before acting. The hard work and patience never fail in anyone’s life. To become a success in any field, one should choose the correct path.

Salman khan’s life is a motivation for people who try to become like a superstar. Salman Khan spreads his skills in other fields too like painting, he learned painting from his mother Salma, who used to paint in earlier days. When you need to shine in the world following his direction, just look for the right Salman Khan quotes and have a look at it. Salman Khan’s life is one of the motivations to reach your passion and to be inspired.