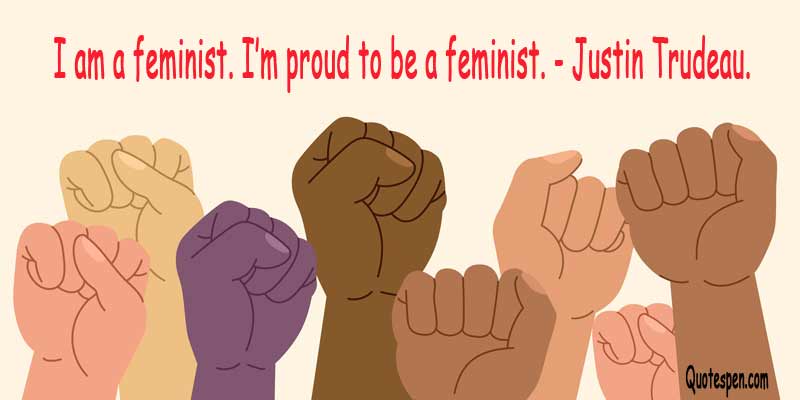 Women Rights Quotes: Every woman, girl, or budding feminist in this world should be aware of their rights. These women’s rights give them the power and freedom to live with pride and confidence. They must be strong enough to express their views and perspective whenever required. Here, we have compiled a list of inspiring and empowering feminist and women’s rights quotes from the most influential personalities Read some encouraging words of wisdom from writers, social activists, and female trailblazers and share them with all other women you know.

No matter which country or province you live in, Gender inequality and discrimination have always been major issues. There have been many social activists and feminists in the past and present that raised their voices for equal women’s rights. Unfortunately, many of them have to face many threats and consequences for such brave acts. Maya Angelou, G.D. Anderson, Gloria Steinem, MalalaYousaf, and Mary Shelley are a few such powerful personalities.  They dedicated their lives to empowering all the women around the world facing adversities.

Explore our unique collection of women’s rights quotes that will you with hope and ignite the lost spark in your life. Trust us, these influential voices will change your perspective towards life and will head you in a new and right direction.  Being a woman, we need to change the years-old belief system that suppresses the human inside us. It’s time to take the lead!

If society will not admit to women’s free development, then society must be remodeled. – Elizabeth Blackwell.

Women have a much better time than men in this world; there are far more things forbidden to them – Oscar Wilde

An idea built the wall of separation between the sexes, and an idea will crumble it to dust.- Sarah Moore Grimké 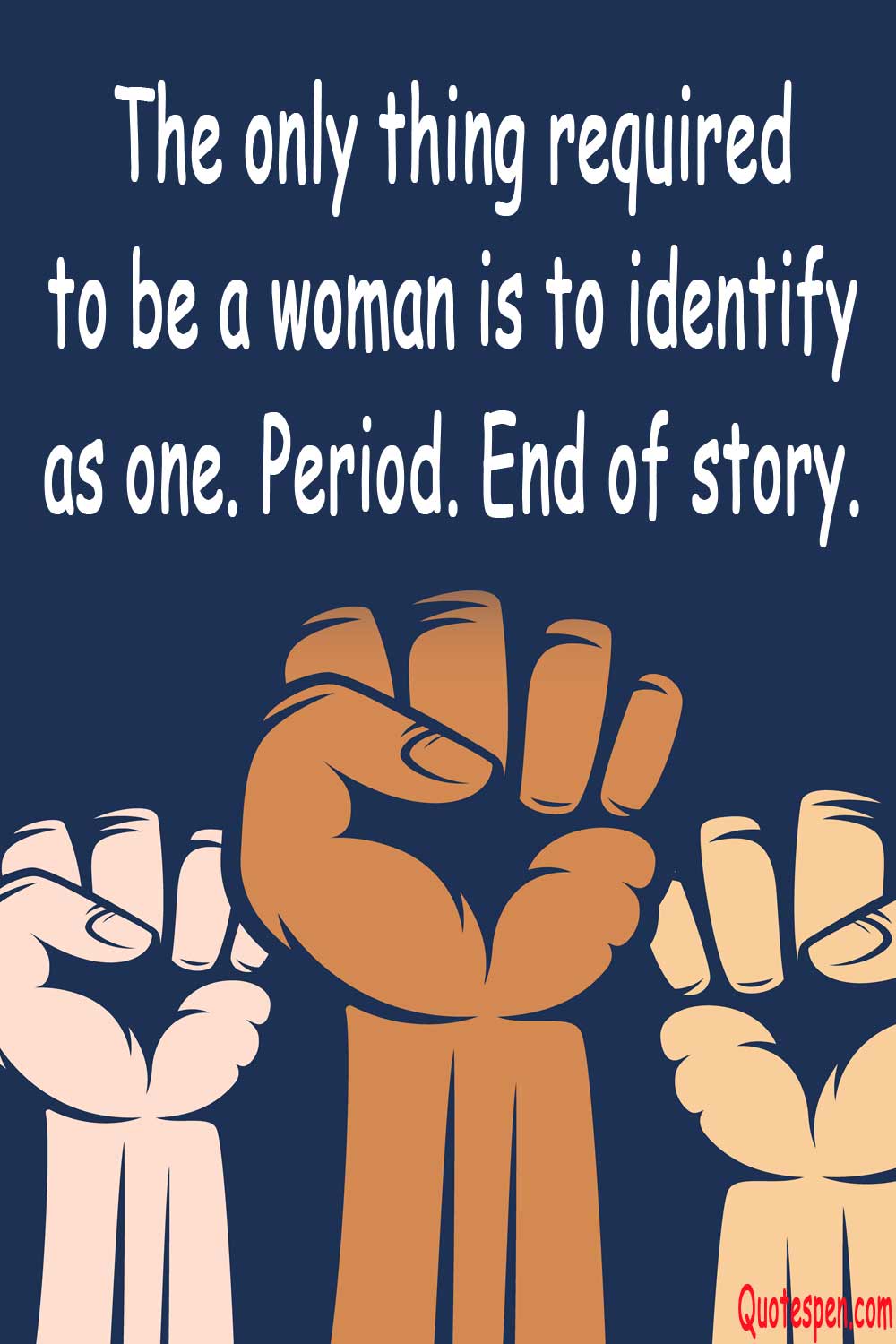 The only thing required to be a woman is to identify as one. Period. End of story.

I do not wish women to have power over men but over themselves.- Mary Shelley.

Let men are compelled to wear our dress for a while and we should soon hear them advocating a change. – Amelia Bloomer.

What are other women really thinking, feeling, and experiencing, when they slip away from the gaze and culture of men? – Naomi Wolf

I recognize no rights but human rights – I know nothing of men’s rights and women’s rights. – Angela Grimke

A feminist is any woman who tells the truth about her life. – Virginia Woolf.

Life is not a competition between men and women. It is a collaboration.

I am a feminist. I’ve been female for a long time now. I’d be stupid not to be on my own side. – Maya Angelou

Men often ask me, ‘Why are your female characters so paranoid?’ It’s not paranoia. It’s a recognition of their situation. – Margaret Atwood

A gender-equal society would be one where the word ‘gender’ does not exist: where everyone can be themselves. – Gloria Steinem

I raise up my voice – not so I can shout, but so that those without a voice can be heard…we cannot succeed when half of us are held back. – Malala Yousafzai

It was we, the people; not we, the white male citizens… who formed the Union. – Susan B. Anthony

I am not free while any woman is unfree, even when her shackles are very different from my own. -Audre Lorde

I think transwomen, and trans people in general, show everyone that you can define what it means to be a man or woman on your own terms. A lot of what feminism is about is moving outside of roles and moving outside of expectations of who and what you’re supposed to be to live a more authentic life. -Laverne Cox

There’s something so special about a woman who dominates in a man’s world. It takes a certain grace, strength, intelligence, fearlessness, and the nerve to never take no for an answer. -Rihanna

It took me quite a long time to develop a voice, and now that I have it, I am not going to be silent. -Madeleine Albright

I can promise you that women working together – linked, informed, and educated – can bring peace and prosperity to this forsaken planet. – Isabelle Allende 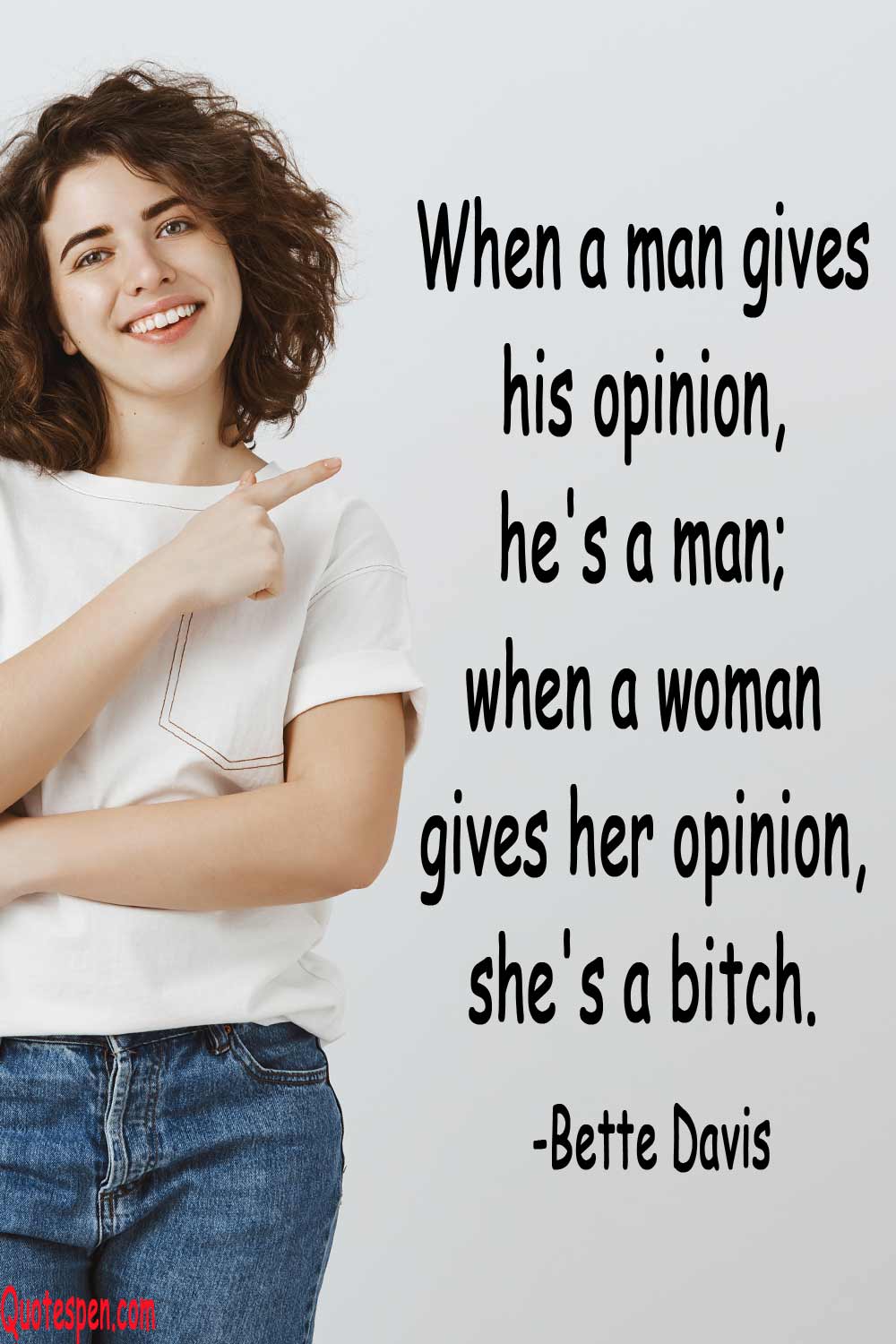 When a man gives his opinion, he’s a man; when a woman gives her opinion, she’s a bitch. -Bette Davis

We need to reshape our own perception of how we view ourselves. We have to step up as women and take the lead. – Beyoncé.

Every women’s civil rights struggle around the world, in a democratic or totalitarian country, whether Christian, Muslim, Hindu, Buddhist, or Jewish – is a struggle of all of ours.

We need to reshape our own perception of how we view ourselves. We have to step up as women and take the lead. -Beyoncé

She was warned. She was given an explanation. Nevertheless, she persisted. The history of progress for women is summed up in 11 words. – Cecile Richards.

The representation of women in society, especially through mass media has been the most delusional act ever done on the grounds of human existence. – Abhijit Naskar.

A state that does not educate and train women is like a man who only trains his right arm. – Jostein Gaarder.

There is no limit to what we, as women, can accomplish.- Michelle Obama

I hate to hear you talking so like a fine gentleman, and as if women were all fine ladies, instead of rational creatures. None of us expect to be in smooth water all our days.

There’s something so special about a woman who dominates in a man’s world. It takes a certain grace, strength, intelligence, fearlessness, and the nerve to never take no for an answer. – Rihanna.

No woman should be told she can’t make decisions about her own body. When women’s rights are under attack, we fight back. – Kamala Harris. 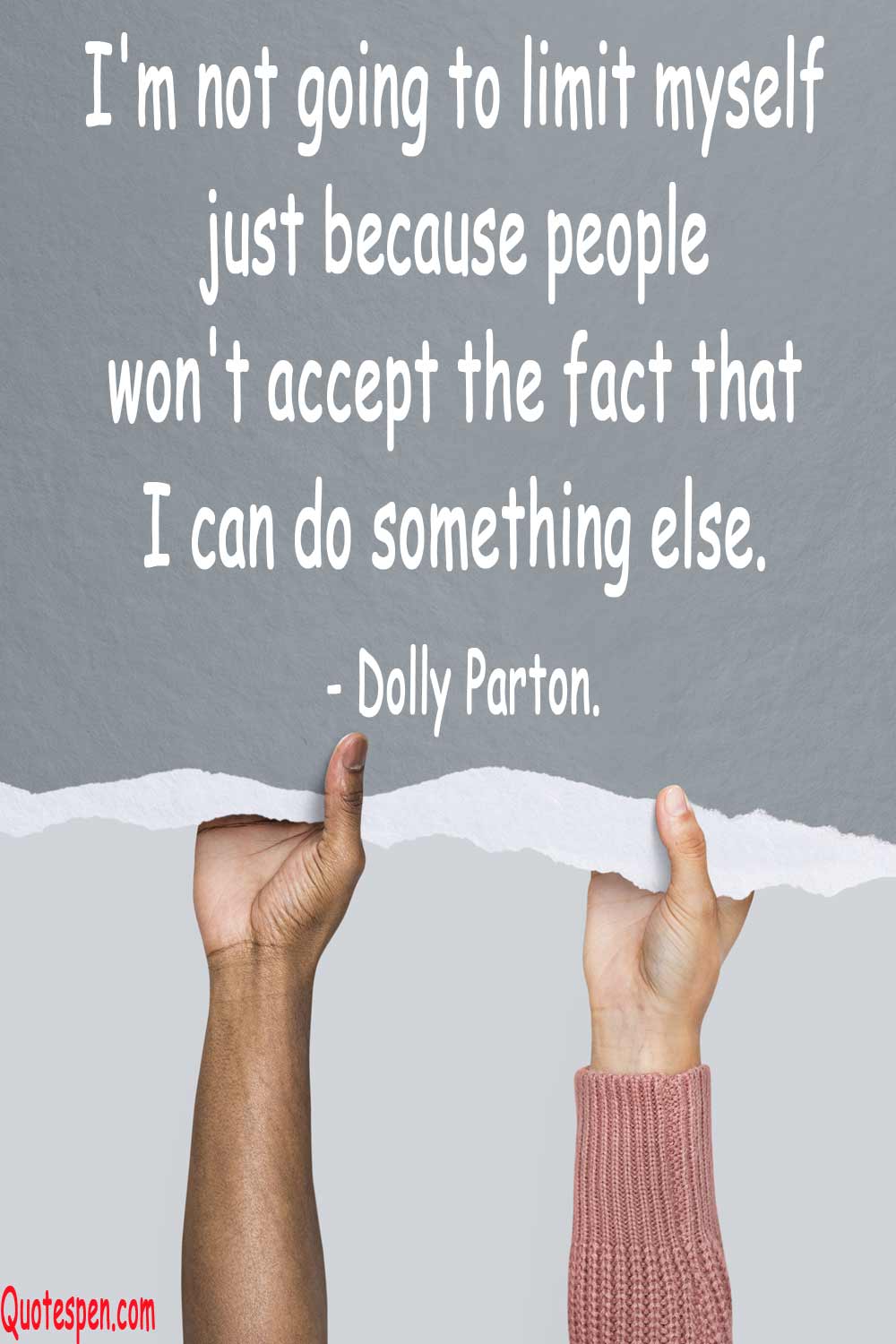 I’m not going to limit myself just because people won’t accept the fact that I can do something else. – Dolly Parton.

I am not free while any woman is unfree, even when her shackles are very different from my own. – Audre Lorde.

My mother told me to be a lady. And for her, that meant to be your own person, be INDEPENDENT. – Ruth Bader Ginsburg

I feel now that the time has come when even a woman or a child who can speak a word for freedom and humanity is bound to speak. – Harriet Beecher Stowe.

I only know that people call me a feminist whenever I express sentiments that differentiate me from a doormat. – Rebecca West.

Responsibility to yourself means refusing to let others do your thinking, talking, and naming for you; it means learning to respect and use your own brains and instincts; hence, grappling with hard work. – Adrienne Rich

It took me quite a long time to develop a voice, and now that I have it, I am not going to be silent. – Madeleine Albright.

Feminism has never been about getting a job for one woman. It’s about making life fairer for women everywhere. It’s not about a piece of the existing pie; there are too many of us for that. It’s about baking a new pie. – Gloria Steinem.

There’s power in allowing yourself to be known and heard, in owning your unique story, and in using your authentic voice.

The emerging woman … will be strong-minded, strong-hearted, strong-souled, and strong-bodied … strength and beauty must go together. – Louisa May Alcott

Teach her that the idea of ‘gender roles’ is absolute nonsense. Do not ever tell her that she should or should not do something because she is a girl. ‘Because you are a girl’ is never a reason for anything. Ever. – Chimamanda Ngozi Adichie.

You cannot shake hands with a clenched fist. – Indira Gandhi.

Have no fear of perfection; You’ll never reach it. – Marie Curie.

No woman can call herself free who does not control her own body. ― Margaret Sanger

I do not wish them [women] to have power over men, but over themselves. ― Mary Wollstonecraft, A Vindication of the Rights of Woman

The truth is women use contraception not only as a way to prevent unintended pregnancies, but also to improve their health and the health of their families. Increased access to contraception is directly linked to declines in maternal and infant mortality.

I consider abortion to be a deeply personal and intimate issue for women and I don’t believe male legislators should even vote on the issue. —Alan K. Simpson

Excellence is the best deterrent to racism or sexism. 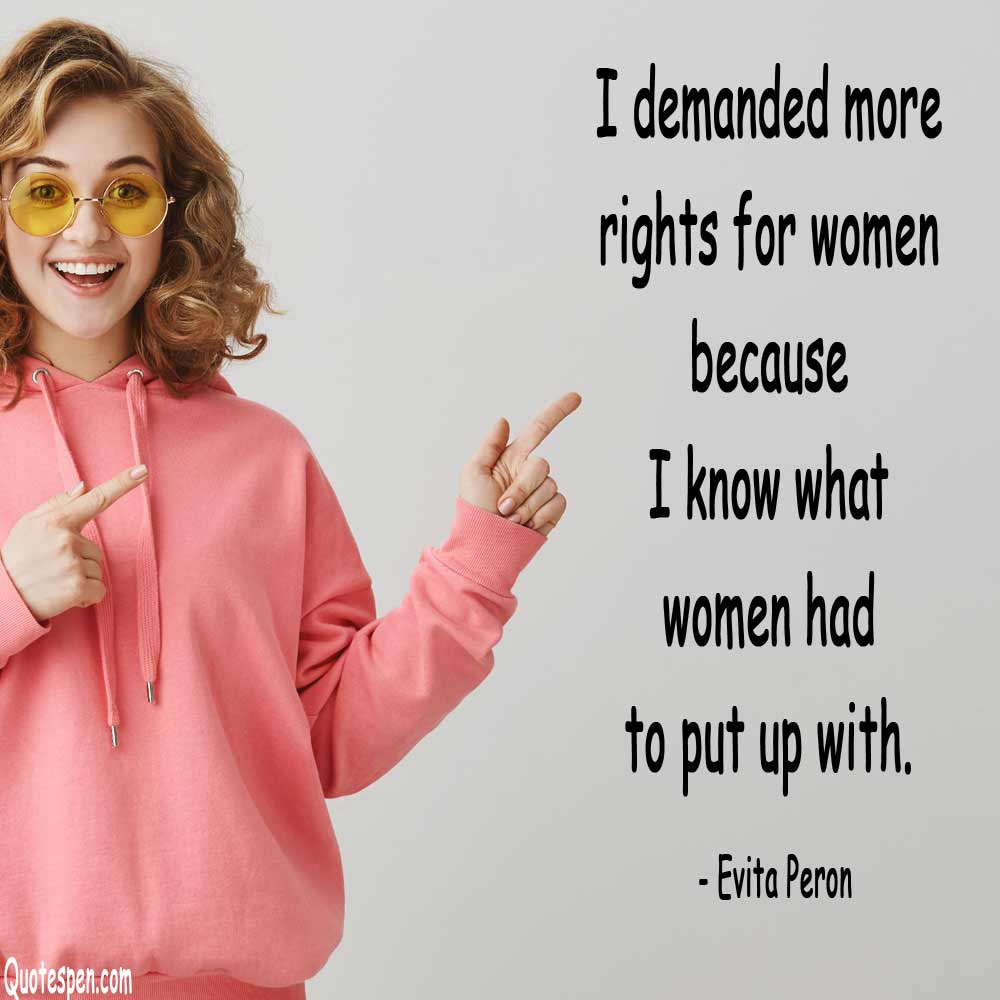 I demanded more rights for women because I know what women had to put up with. – Evita Peron

We are struggling for a uniting word, but the good news is that we have a uniting movement.

I believe feminism is grounded in supporting the choices of women even if we wouldn’t make certain choices for ourselves. ― Roxane Gay

Women are not an interest group. They are mothers and daughters, and sisters and wives. They are half of this country and they are perfectly capable of making their own choices about their health.

If we lived in a culture that valued women’s autonomy and in which men and women practiced cooperative birth control, the abortion issue would be moot. 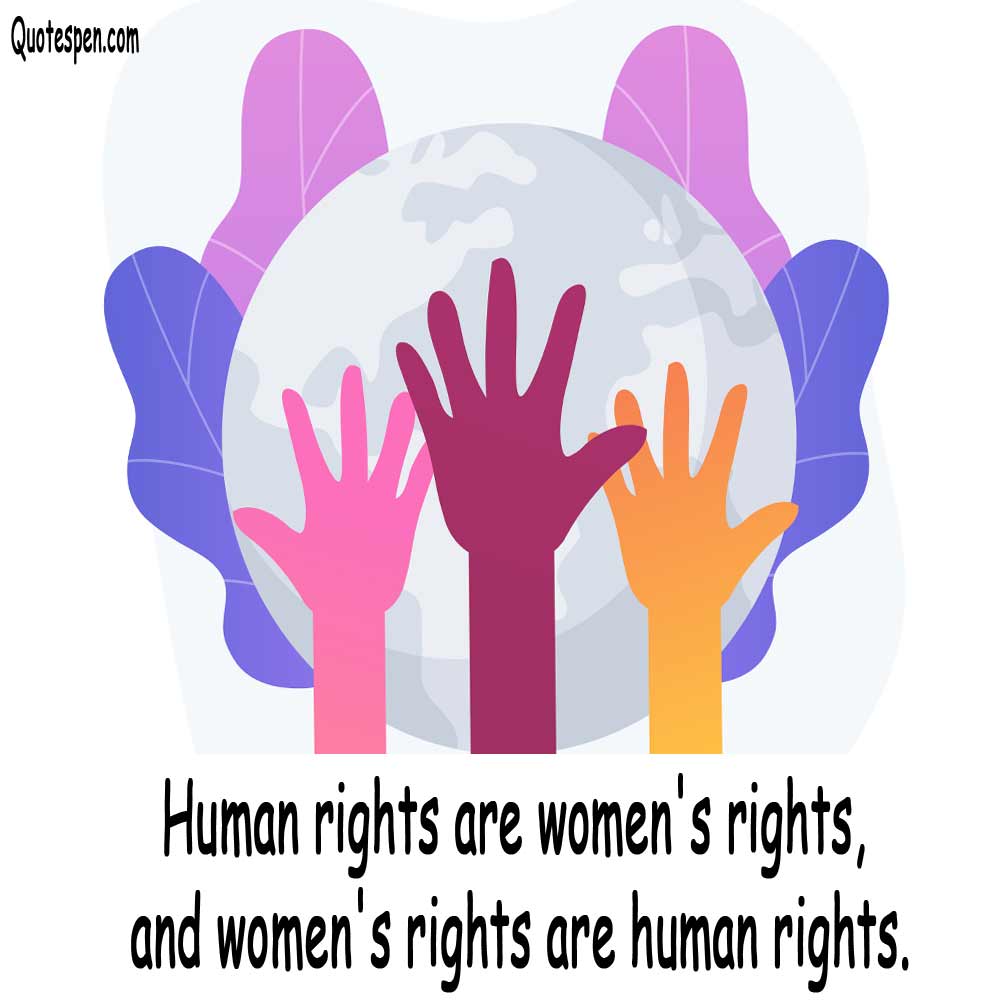 No matter what men think, abortion is a fact of life. Women have always had them; they always have and they always will. Are they going to have good ones or bad ones? Will the good ones be reserved for the rich, while the poor women go to quacks?” – Shirley Chisholm, Unbought And Unbossed

We cannot confront the massive challenges of poverty, hunger, disease, and environmental destruction unless we address issues of population and reproductive health.

The lie that abortion is murder is right-wing propaganda designed to demonize Democrats. Abortion is legal all over the world because a fetus without a cerebral cortex cannot think or feel before the 27th week. According to the CDC, almost all abortions happen before the 13th week. – Oliver Markus Malloy, Inside The Mind of an Introvert 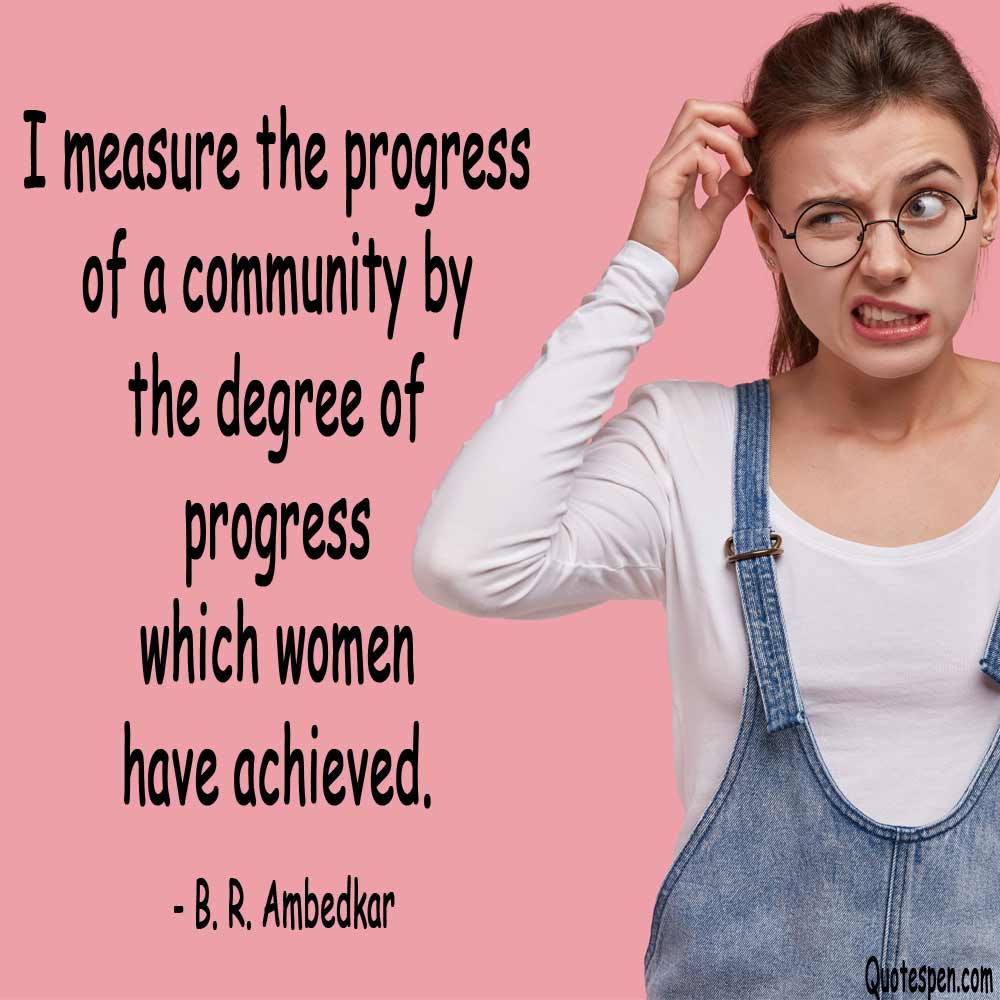 I measure the progress of a community by the degree of progress that women have achieved. – B. R. Ambedkar

We shall see better days soon and our progress will be accelerated if male education is persuaded side by side with female education.

Be educated, be organized, and be agitated.

The stories of women entering into public discussions with men on most abstruse subjects of religion, philosophy, and metaphysics are by in no means few.

Many people criticize feminism. Feminism has nothing to do with prioritizing women, or unbiased decision that favors women. It’s more about treating women with equality. There is no denying the fact that about every woman is mistreated in some or another way. and Women are way more powerful, patient, and thoughtful than most men are.

You must have heard of all-time favorite quote ‘Women’s rights are human rights. ’This single yet most thoughtful quotes encompass the whole feeling and describe what exactly women’s rights are about. Several women’s rights quotes come from the most powerful women in the world. They have experienced the pain and the suffering and it is truly reflected in their quotes.

Now, walk through our ultimate women’s rights quotes and do share them with all your male/female friends. Take the initiative to remodel the society, and bring the change. You can also share these meaningful messages on your Whats app, Instagram or Facebook!