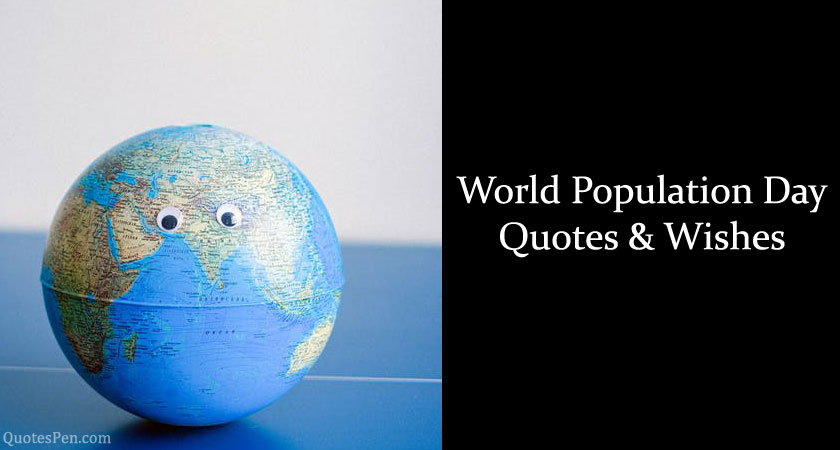 World Population Day Quotes: 11th July of every year is celebrated as the world population day. The motto is to make people aware of the rising population. The celebration started in 1987 when the global population reached 5 billion and is rising since then. Being a part of this world, it’s our responsibility to share messages and quotes with our family and friends. Check our collection of inspiring and encouraging world population slogans, posters, quotes on this page. Let the world know, Use these quotes to update your whats app status or post an image on your Facebook wall. Every single effort makes a difference.

The growing population each passing day has become a global issue. Our generation is dealing with lots of problems from poverty to unemployment. The future of next-generation is in our hands so let them use the full natural resources. Let’s increase awareness, and save our planet earth by controlling the population.

Best Wishes on World Population Day for everyone. Smart planning of the population can be the best gift for our children.

Let us be more responsible for this celebration of world population day. Because together we can! 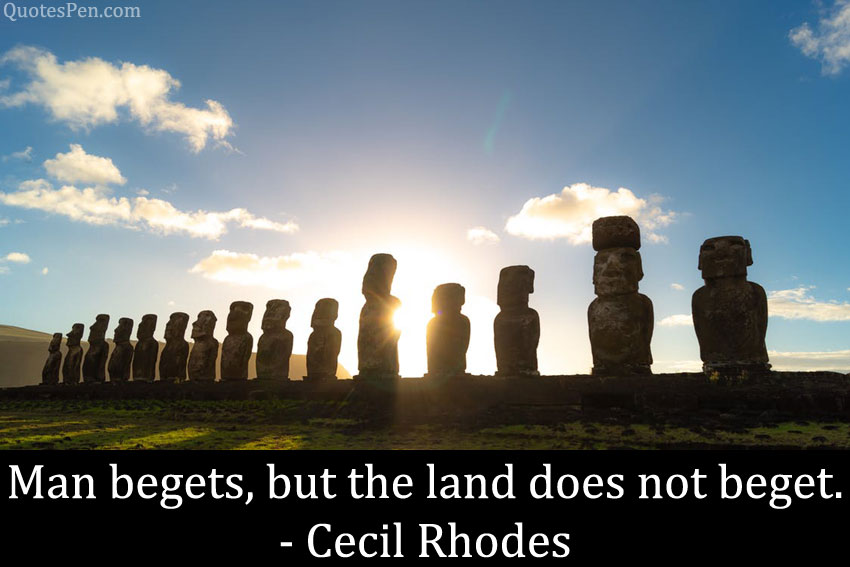 Man begets, but the land does not beget. – Cecil Rhodes

Save the planet by not overflowing it with people. Enjoy the World Population Day.

Be responsible to manage the population before nature takes the responsibility into its hand. Happy World Population day everyone. 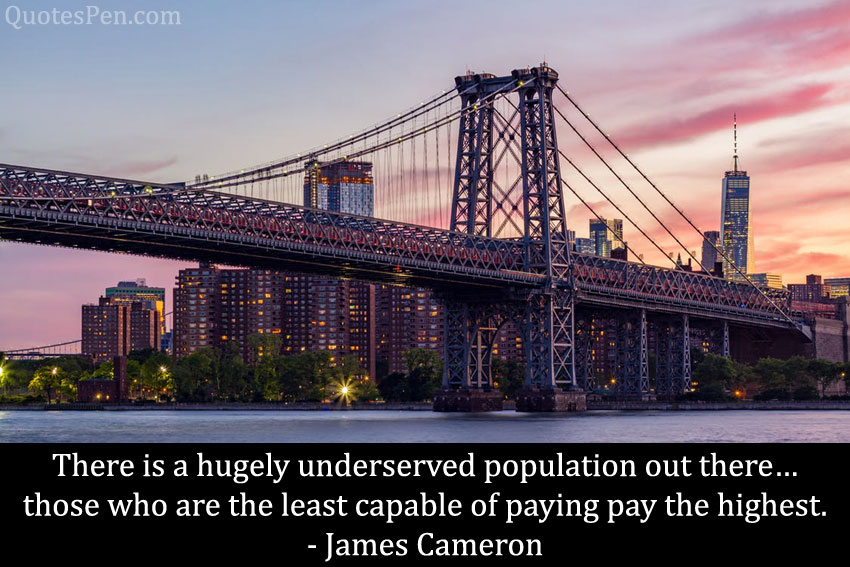 There is a hugely underserved population out there… those who are the least capable of paying pay the highest. – James Cameron

We need to continue to decrease the growth rate of the Global Population. The Plant can not support many more people.- Unknown

In a region with a growing population, if you’re doing nothing, you’re losing ground. – Stewart Udall

The power of population is indefinitely greater than the power in the earth to produce subsistence for man.- Thomas Malthus

Almost half of the population of the world lives in rural regions and mostly in a state of poverty. Such inequalities in human development have been one of the primary reasons for unrest and, in some parts of the world, even violence.- A. P. J. Abdul Kalam

Yet food is something that is taken for granted by most world leaders despite the fact that more than half of the population of the world is hungry. – Norman Borlaug 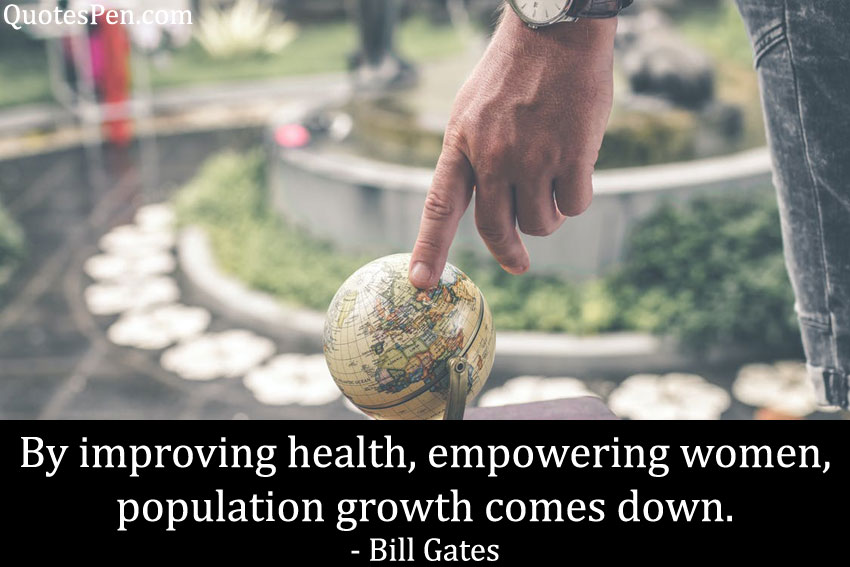 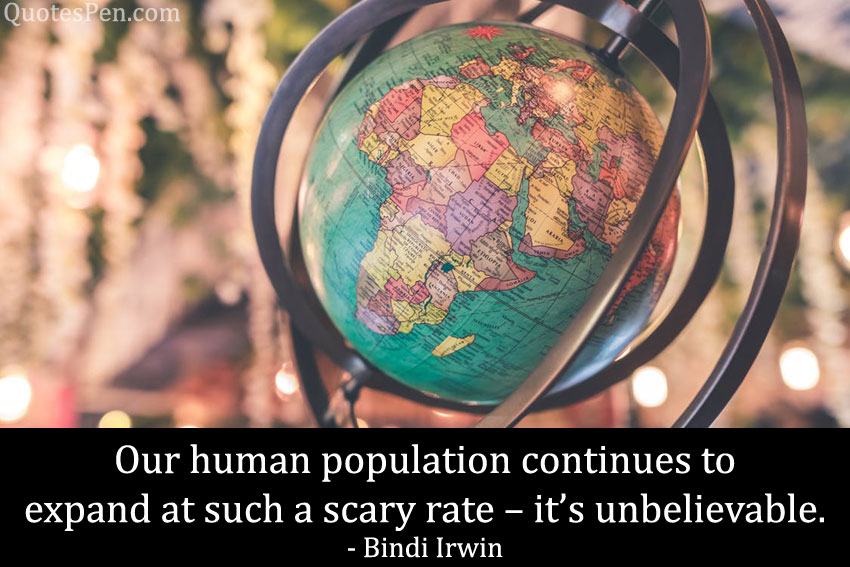 Our human population continues to expand at such a scary rate – it’s unbelievable.- Bindi Irwin

When the family is small, whatever little they have they are able to share. There is peace.- Philip Njuguna

Population control is not an issue involving contraceptives for third-world women. It is an issue of ecological justice. – Vandana Shiva

Times are gone when we could relax and take it easy. It is time to act and act strongly to control the growth of the population to help our coming generations.- Unknown

As a woman leader, I thought I brought a different kind of leadership. I was interested in women’s issues, in bringing down the population growth rate… as a woman, I entered politics with an additional dimension – that of a mother.- Benazir Bhutto

The real problem is not a population explosion, but what the population is doing. – Radhanath Swami

Every state has the primary duty to protect its own population from grave and sustained violations of human rights, as well as from the consequences of humanitarian crises, whether natural or man-made.- Pope Benedict XVI 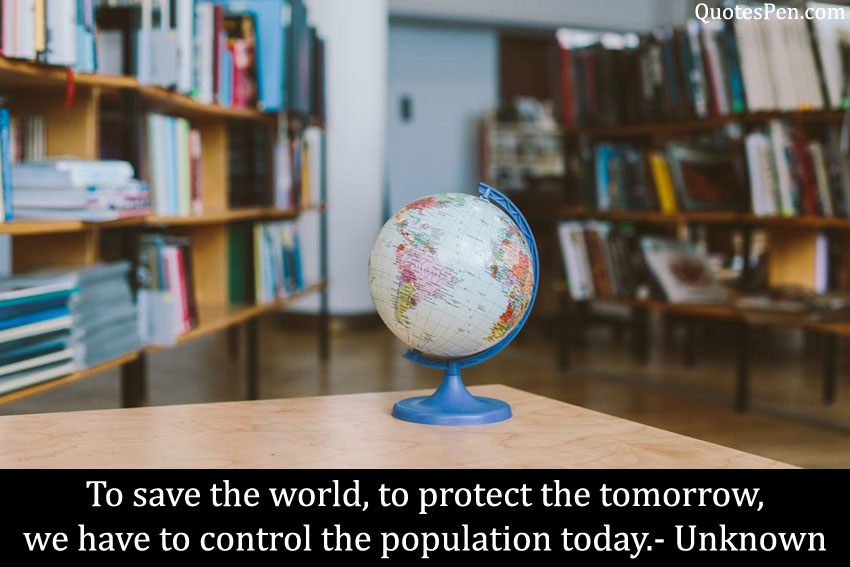 To save the world, to protect the tomorrow, we have to control the population today.- Unknown 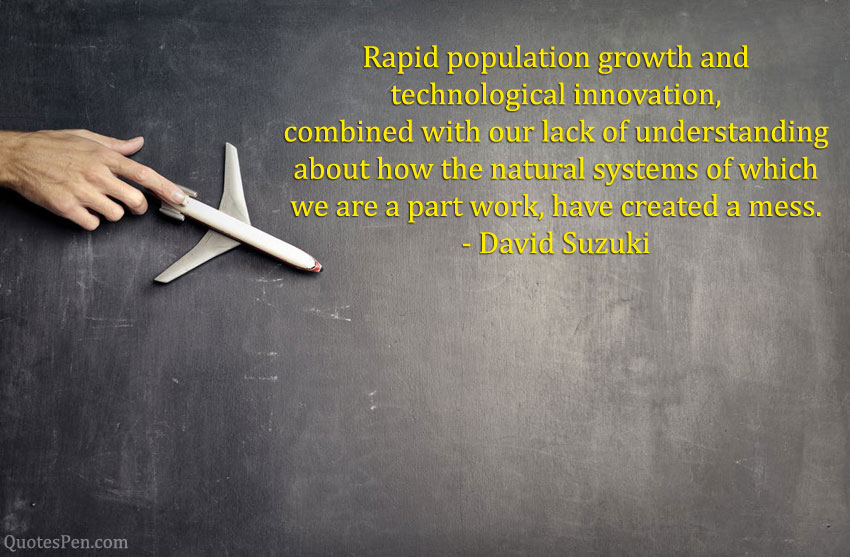 Rapid population growth and technological innovation, combined with our lack of understanding about how the natural systems of which we are a part work, have created a mess.- David Suzuki

Day by day the population of the world is increasing at a speed like an express train and we have to understand the issue of the population. If you will go with the current speed then in next 15-25 years then world have to face many unwanted issues. This is why world population day has organized and we should have to be part of this moment. Let’s take responsibility into our hands and aware of the world. Here you will find a good list of world population slogans in English. Write on a board, paper, or send digitality to your contacts.

Control overpopulation to remain away from starvation.

Let us be spacious on this planet for our own sake.

Focus on the population to fight poverty and illiteracy.

Earth cannot carry the heavy load for long, so think about population control.

Take the pledge to control the population.

Plan your family and protect the planet. 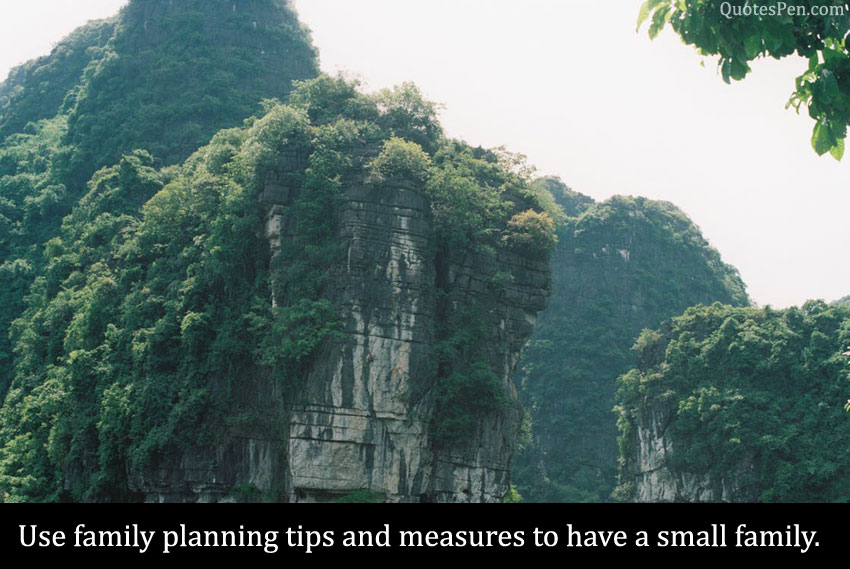 Use family planning tips and measures to have a small family. 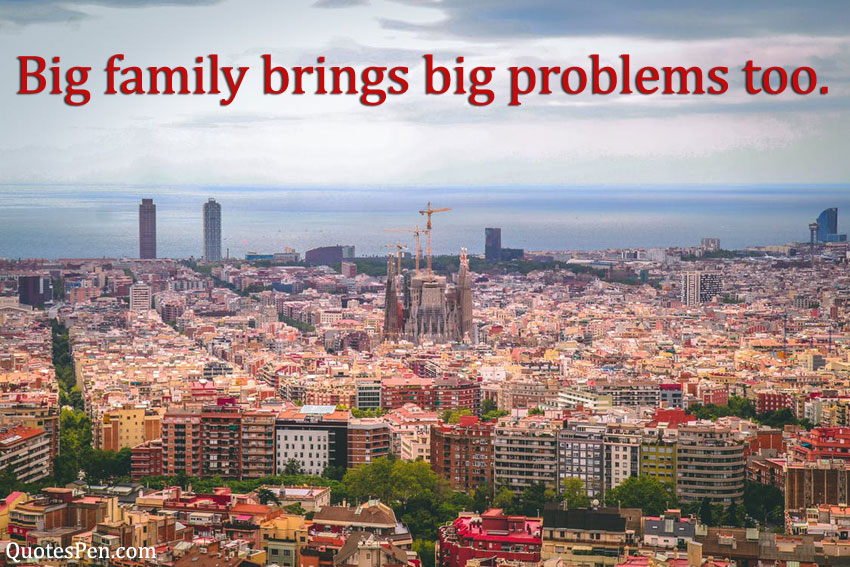 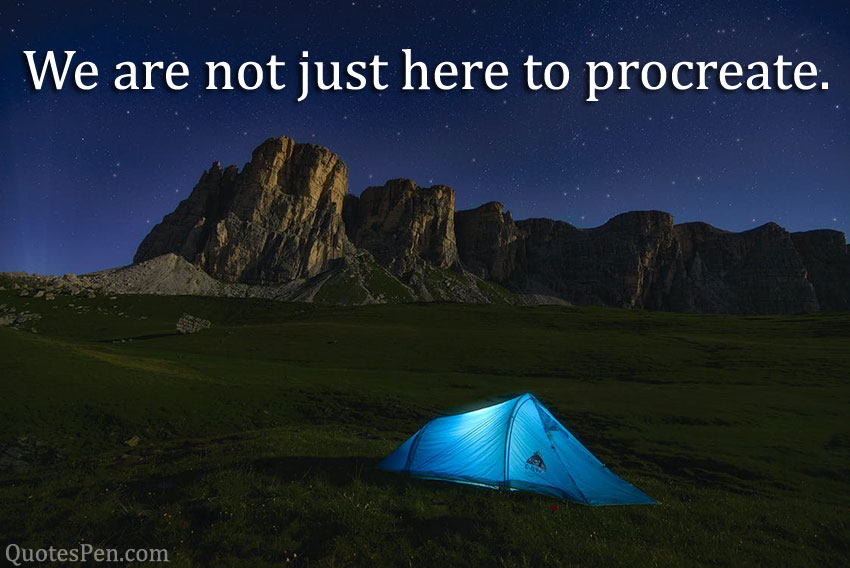 We are not just here to procreate.

Use a lid to have just one kid.

Population explosion can cause cancer…for the earth.

Keep a small family to have a big happy life.

Take care of the children we already have, don’t increase the population.

It is easy to add more, but difficult to maintain.

Adopt a child instead of giving birth to your own child.

Reduce the population and empower women. 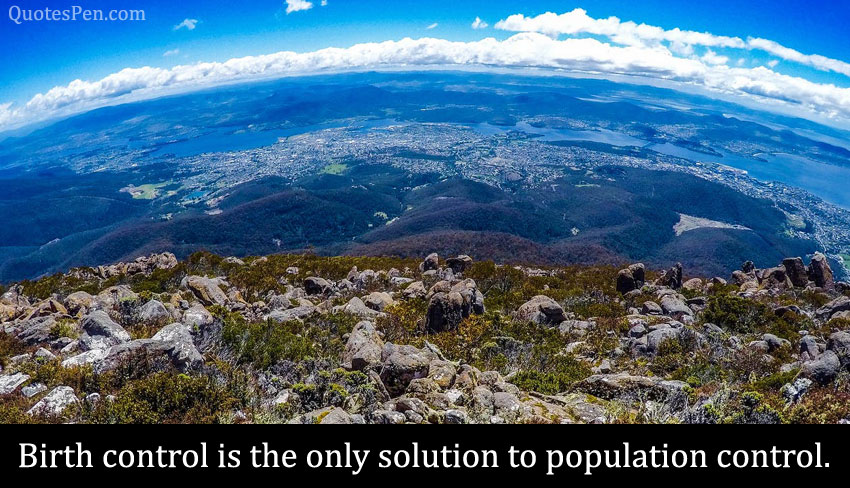 Birth control is the only solution to population control. 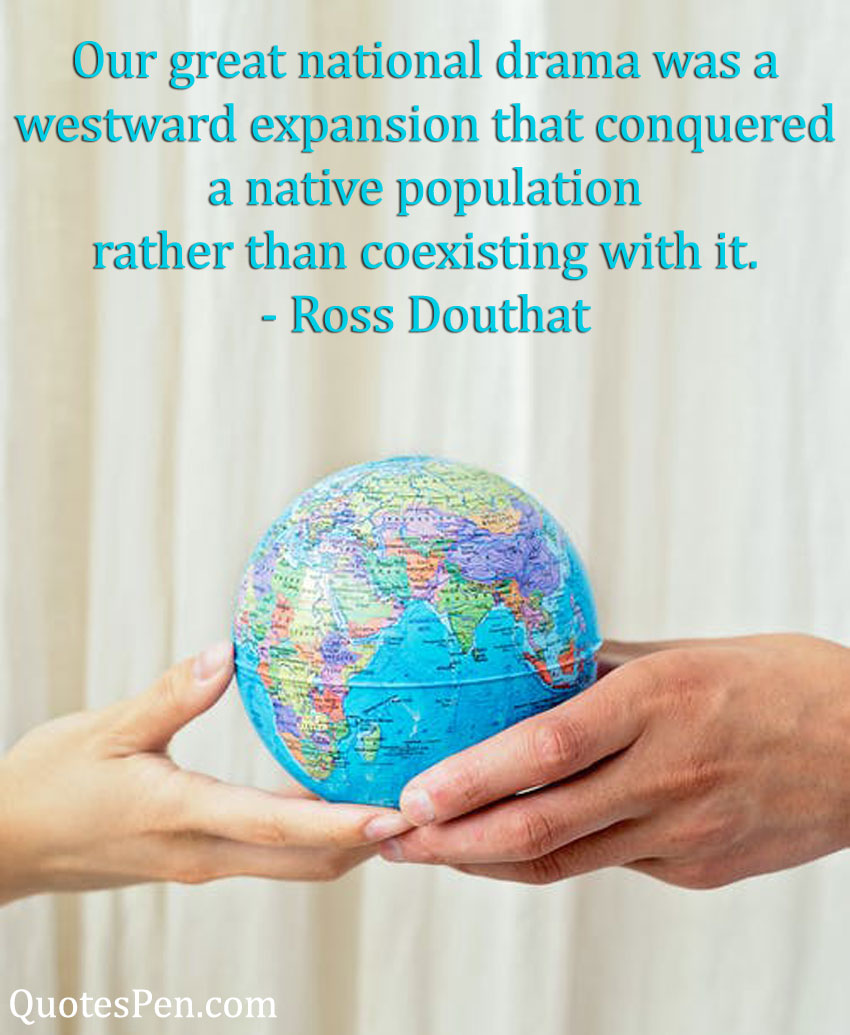 Our great national drama was a westward expansion that conquered a native population rather than coexisting with it. – Ross Douthat

When the faith dies, the culture it produced begins to die, then the civilization goes, and, then, the population. – Pat Buchanan

You cannot control your own population by force, but it can be distracted by consumption. – Noam Chomsky

Listening to an underserved population is how you begin to understand them and serve them better. – Constance Wu

Although children are only 24 percent of the population, they’re 100 percent of our future and we cannot afford to provide any child with a substandard education. – Ed Markey

As an atheist, I am angry that we live in a society in which the plain truth cannot be spoken without offending 90% of the population. – Sam Harris

We’re going to merge with machines and become gods, but first, we’ve got to reduce the world population 90 percent. – Alex Jones 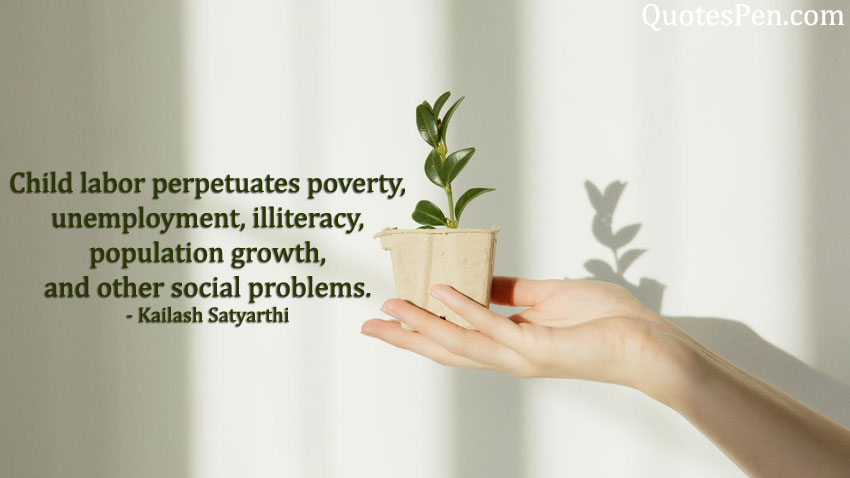 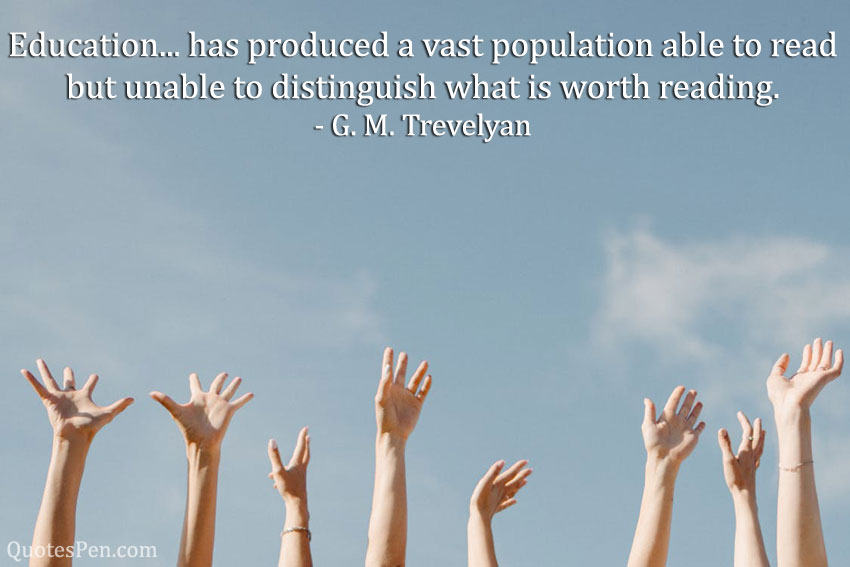 Education… has produced a vast population able to read but unable to distinguish what is worth reading. – G. M. Trevelyan 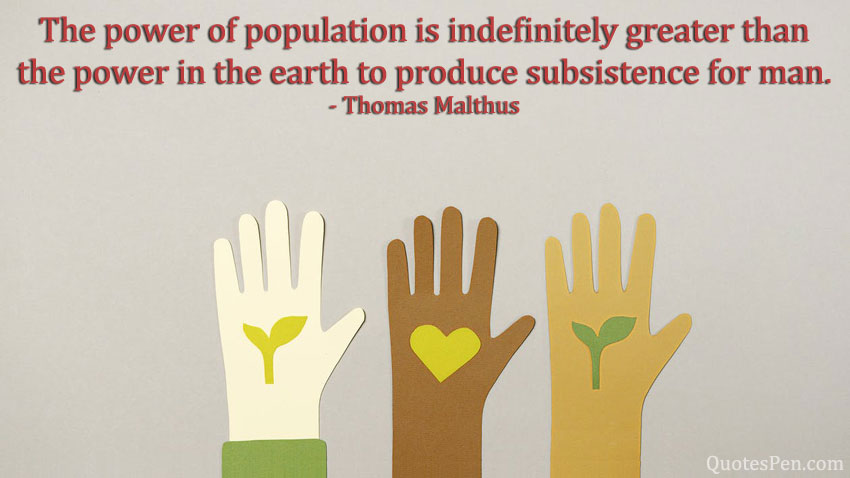 The power of population is indefinitely greater than the power in the earth to produce subsistence for man. – Thomas Malthus

Let’s restrict your family planning to only 1-2 kids only and help the world to control the population. Also, send world population day messages to your relatives, friends, and social friends to aware them.

The world is not a gift from our ancestors but a loan from our children. Save it and create a better world for them. Don’t overpopulate it. Best wishes on World Population Day.

Live bravely and enjoy the beautiful things the world has to offer. Control the population and celebrate World Population Day.

Take a stand, raise awareness. Help, since we are nearly running out of space. Best wishes on World Population Day.

Times are gone when we could relax and take it easy…. It is time to act and act strongly to control the growth of the population to help our coming generations.

Let us celebrate World Population Day by promising ourselves to be more responsible towards the alarming rate of the growing population. Let us work to make this planet a better place.

Be responsible, save our nature. Control population growth and ensure a healthy planet. Celebrate World Population Day and raise awareness. 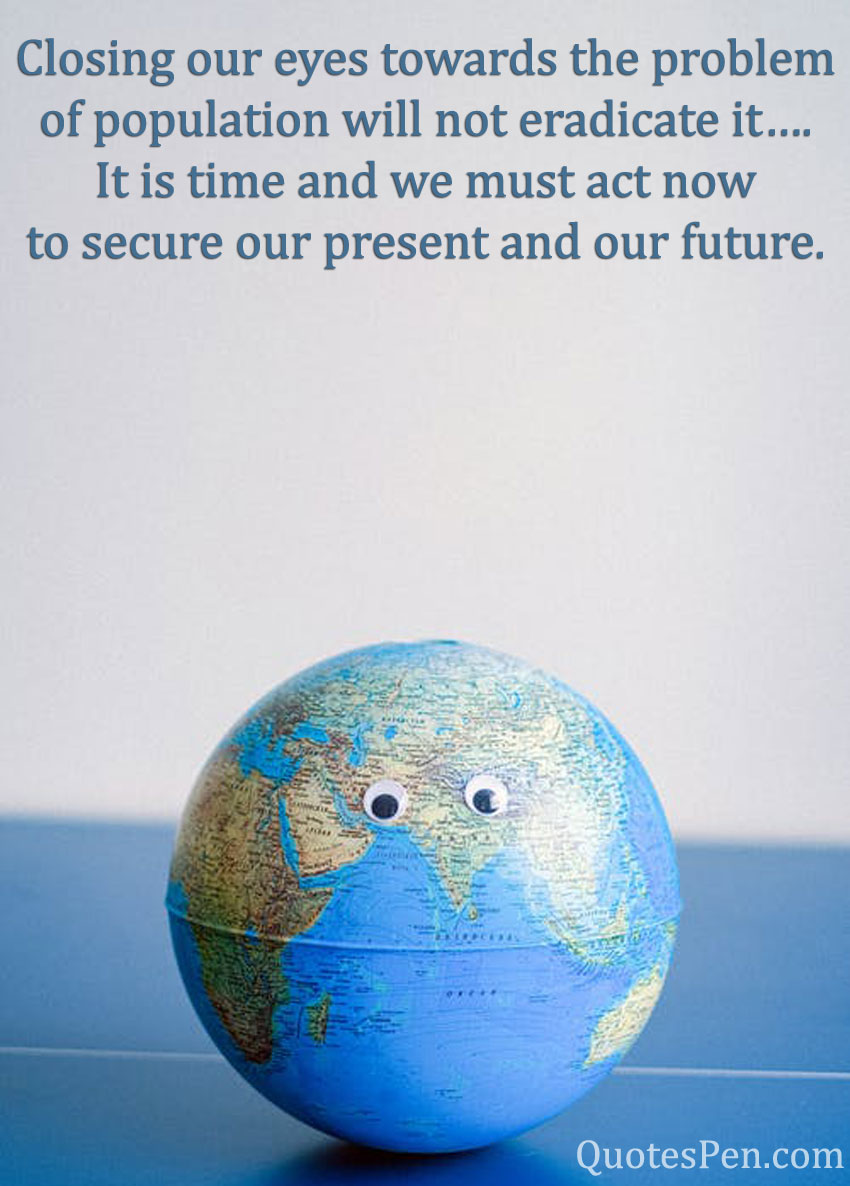 Closing our eyes towards the problem of population will not eradicate it…. It is time and we must act now to secure our present and our future. 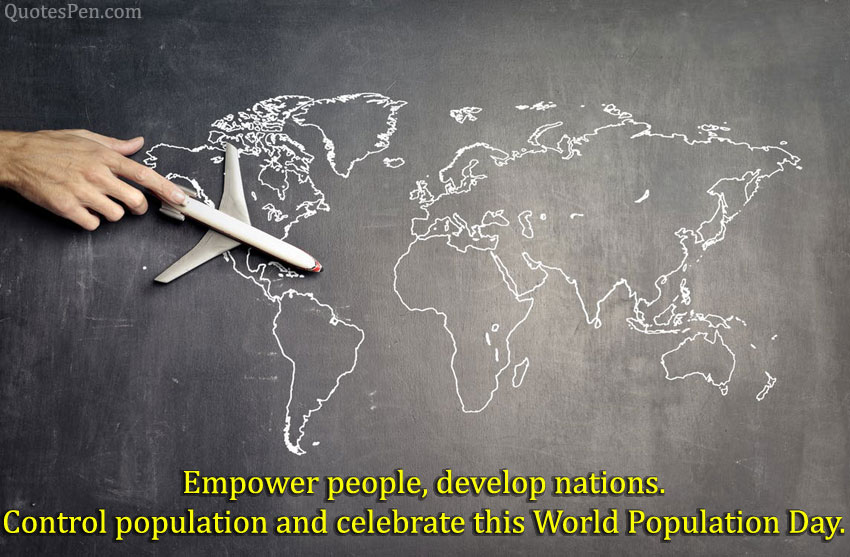 A peaceful world cannot exist when only one-third are rich and two-thirds go hungry. So, control the population and stop overcrowding. Best wishes on World Population Day.

Overpopulation is the definition of being forced by others or focusing on others to live with people they don’t want. Control the global population and celebrate World Population Day.

On the occasion of World Population Day, let us make a promise to ourselves to be more responsible towards the increasing population.

Our mother earth can’t feed so many people. Control the global population for our nature’s sake and celebrate this Day. Best wishes on World Population Day.

Too many humans are a risk to humanity. Save our planet and ensure humanity by working towards controlling the population on World Population Day.

Celebrations of World Population are incomplete without understanding the importance of educating each person on the planet to tell him the need for controlling the population for a better tomorrow….. Warm wishes to you on World Population Day 2021.

Today, on the occasion of World Population Day, we must understand the need of stabilizing the population in order to live a healthy and harmonious life with lesser problems and more peace. 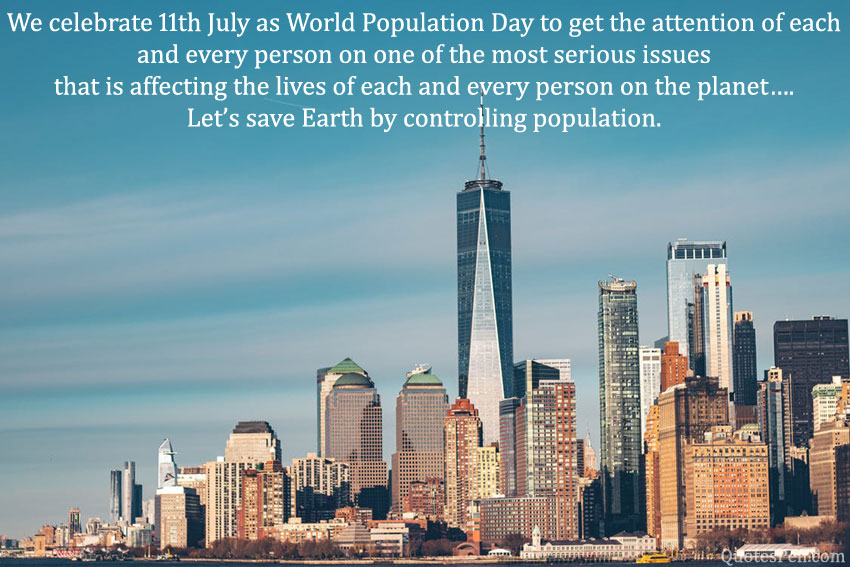 Do you know; India and china together own about 36% of the world population? Think of this world as your own family. The growing population is affecting different regions in different ways. People are depressed, facing gender inequality, maternity problems, human rights, and other issues as well.

The World population 2021 theme is based on women and girls. UNFPA’s goal for this year is to make people aware of the girl’s and women’s reproductive health, sexual needs, and vulnerabilities during the Covid-19 pandemic. So take some responsibility on your shoulders and voluntarily participate in this campaign to help all the suffering women. Don’t forget to read and share our motivational world population 2021 messages on social media platforms.